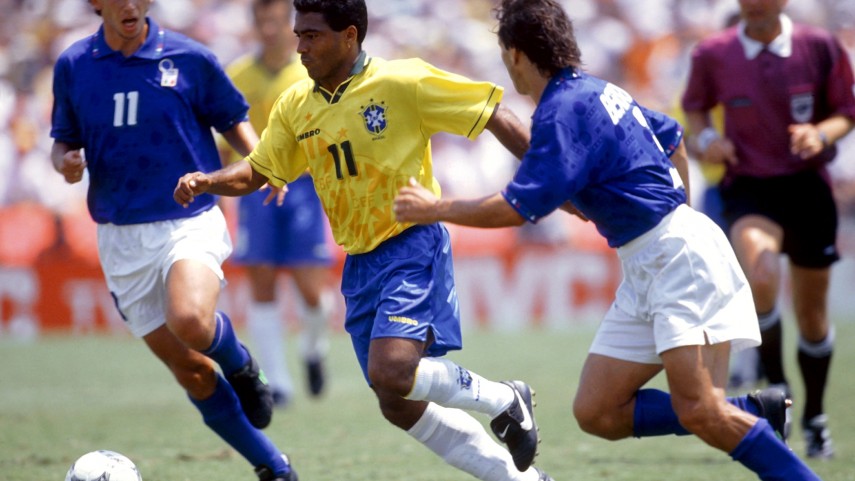 The Brazilian took part in two World Cups with his national team. In USA 1994, his five goals were vital in his side’s fourth world title.

Romário da Souza Faria, 'O Baixinho' as he is known in his country, is the only player to have been the top scorer 14 times in various leagues: ten times in Brazil, three in Holland and one in Spain. A world champion with Brazil in 1994, Romário was a lethal weapon for his national team.

Brazil
Romário made his debut aged 24 in the FIFA World Cup held in Italy in 1990. The Brazilian only just made it to the competition due to an injury that season and was only able to play 66 minutes in his national team's game against Scotland in the group stage. That World Cup was one of the worst in history for the Brazilians, who were knocked out in the Round of 16 against Argentina.

His record in the World Cup
After the disappointment of the 1990 World Cup, Romário enjoyed his best years individually, particularly in the 1993/94 season. In his first campaign at FC Barcelona, he managed to win the Liga BBVA and was the top scorer in the division with 30 goals. He also received the FIFA World Player award.

In the United States he excelled along with his team Brazil. He scored five goals, one fewer than top scorers Oleg Salenko and Hristo Stoitchkov, and won the World Cup Ballon D'Or. Brazil were in Group B with Sweden, Russian and Cameroon. These three teams were all victims of Romário, who found the net again in the quarter-finals against Holland. In the semi-finals, Brazil met Sweden once again and the then Barcelona player scored the only goal in the match and put Brazil in a World Cup final after a 24-year absence. The game against Italy is still the only final that ended goalless. In the penalty shoot-out, Romário scored the second, taking Brazil closer to their fourth title.

A turning point
In January 1995, Romário left FC Barcelona. At CR Flamengo his goal-scoring instinct was rekindled, opening up the doors to the Liga BBVA once again. His destination was Valencia CF, where he failed to make an impact and had problems with his manager Luis Aragonés, who famously once said to him: "Look me in the eyes when I speak to you". After playing eleven games in two seasons and suffering an injury, he returned to Flamengo.

Romário never wore a Brazil shirt again in a World Cup. In 1998 a serious injury kept him away from France and in 2002 the national manager Luiz Felipe Scolari did not select him despite his great season at Fluminese FC aged 36. His list of achievements with Brazil, aside from the 1994 World Cup, include two Copa Américas, a FIFA Confederations Cup and a silver medal in the 1988 Olympics, in which he was also the player of the competition and top scorer.

The striker retired from international football in 2007 and said farewell in the best way he knows: scoring. Now he has swapped the playing field for politics and he is currently a deputy for Rio de Janeiro.