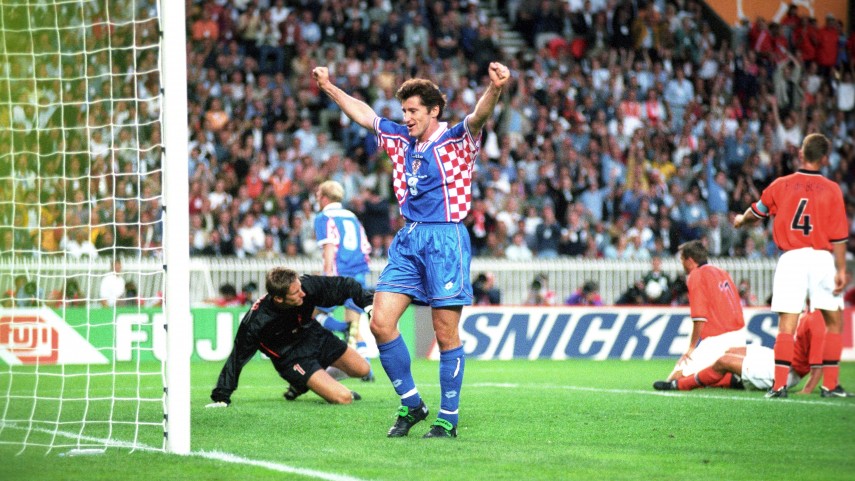 The Croatian striker was the top goal-scorer at the 1998 World Cup in France, with six goals, and took his side to the cusp of glory.

It was mid-June 1998 when Croatia, part of the former Yugoslavia, travelled to France to compete in the World Cup for the first time. If anyone had told their squad of young talented players that they would be the surprise package of the competition that year, they probably would not have believed it. Even less so one of their strikers, the tall and cunning Davor Šuker (Osijek, 1968), the team's number 9.

His team's tournament
Croatia played with pride and elegance in a fascinating tournament in which they joined France, the hosts, and Brazil on the podium. The team coached by Miroslav 'Ćiro' Blažević and led by Zvonimir Boban in the midfield was elevated to glory, partly thanks to the left foot of Davor Šuker, a gangly forward who, after successful spells with Sevilla FC and Real Madrid CF in the 90s, became the World Cup's top goal-scorer that season, with 6. All of them proved decisive for his team.

His World Cup campaign
Jamaica, Japan, Romania, Germany, France and Holland were his victims. He put one past each of them, including the French, who they lost to in the semi-finals (2-1) before playing in the third place playoff against the Dutch (1-2). It was the only defeat for Croatia in the 1998 World Cup.

Šuker only failed to find the net against Argentina (1-0), in the final match of the group stage. Against Romania, a last-minute strike from the legendary player saved them (0-1) and took them to a clash with a fearful German side; the same one that had knocked them out of UEFA EURO 1996. This time though, the Croats were out for revenge and they got their own back by thumping the Germans 3-0, Šuker bagged the third. He was a natural born hero, and he knew it.

Turning point
Despite having lifted the UEFA Champions League trophy with Real Madrid that season after a difficult year, Šuker was not satisfied until he had put the name and style of Croatia in the headlines; and what better way to do so than by scoring goals at the World Cup. He had already made his plans before the competition got underway: "I want to be the top goal-scorer at the tournament".

And he was. "I'm the happiest man in the world, nobody can take the happiness of being the top goal-scorer and having this bronze medal on my chest away from me", he said after the final whistle that brought the tournament to a close. The forward later cemented his name in Croatia's history by becoming their all-time top goal-scorer, finding the net 45 times in 46 games.

In club football, he changed Madrid for London in 1999 with a move to Arsenal FC. Then came West Ham United and TSV 1860 München, where he made his name in Europe. He will be in Brazil as president of the Croatian football federation, having changed pitch for box.