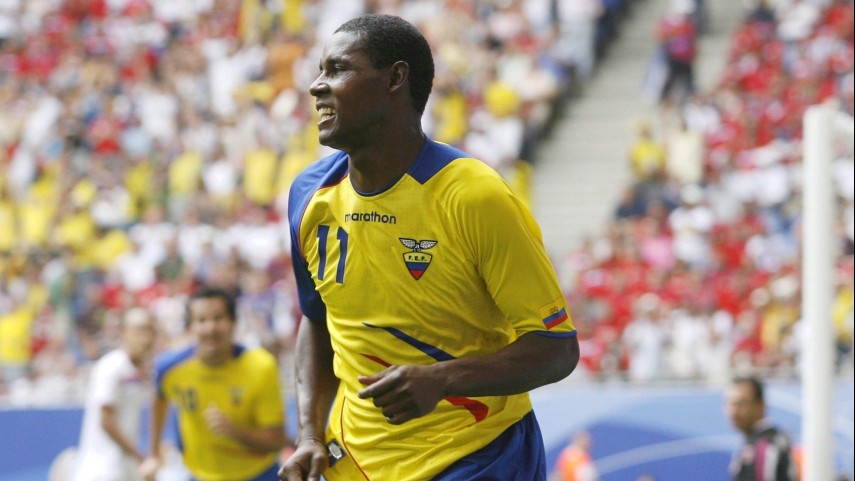 The Ecuadorian striker who wrote his name into the history books by scoring his nation’s first World Cup goal.

The Ecuadorian national team has now become a staple at the World Cup. The South American side made its World Cup debut in 2002, going out in the group stage of the South Korean and Japanese competition. At the head of that physical and proud team’s attack was Agustín 'Tín' Delgado, a player who stood out because of his physique and aerial ability. During the two World Cups be played in (2002 and 2006), the Ambuquí-born forward scored three times, a tally that makes him his country’s top goalscorer in the competition.

The role of his national side
The Ecuadorian national side, like most debutants, did not have a great first World Cup. However, the South Americans did go home with a few treasured memories from their first participation in the international tournament. Finding themselves in Group G with Mexico, Croatia and Italy, Hernán Darío’s men bowed out of the Asian competition after picking up two defeats and a solitary win (against the Croatians), having missed out on a place in the last 16 by just one point. Agustín Delgado scored the country’s first World Cup goal during that competition, grabbing Ecuador’s only goal in their 2-1 defeat to Mexico.

His history in the World Cup
After writing his name into Ecuadorian World Cup folklore, 'Tin' Delgado led his nation once again during the 2006 competition along with other great forwards like Iván Kaviedes, Carlos Tenorio and the now deceased Christian 'Chucho' Benítez.

During the German-held competition, in which the Italians were crowned champions, Luis Fernando Gómez’s players accomplished the extraordinary by reaching the last 16 of the competition for the first time after beating Poland and Costa Rica, matches in which Agustín Delgado got his name on the score sheet. Those two goals would be the former Southampton FC player’s last ever for his national side, although he is still the country’s top goalscorer of all time having found the back of the net 31 times in 72 games.

Before and after
Since 2002 Ecuador’s standing in the world of football has risen significantly with the country qualifying for three of the last four World Cups, only missing out on the South African edition of the tournament four years ago.

Delgado hung up his boots in 2010, ending his playing career with Club Deportivo Valle del Chota, where he remains as the current club president. After making his name on a global stage, he won the Copa Libertadores and came runner-up in the Club World Cup with Liga Deportiva Universitaria de Quito, before then moving to Ecuadorian side Emelec. Included in his long list of personal achievements, he also managed to tog out for all of Ecuador’s big-four sides during his career.