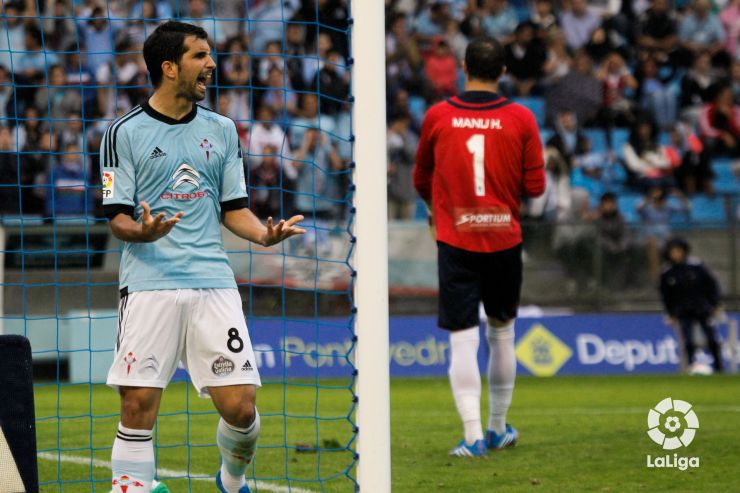 "We are lucky because Celta has confidence in its youth academy"

Celta's midfielder spoke to LFP.es about the Galician side's promising situation in the Liga BBVA and his early days as a Vigo player.

RC Celta de Vigo midfielder Álex López Sánchez is one of the academy players who has found a place for himself in the first team and he is in the form of his life this season. López has become a key player for Luis Enrique's Celta, the team with which he has scored five goals in 24 Liga BBVA matches. The player from Ferrol answered some questions for LFP.es and spoke about his early days at the Galician club and the promising situation of the Vigo side as the end of the season draws near.

LFP.es: Vigo is a land of opportunity for young hopefuls. You, Santi Mina and Hugo Mallo are just some of the academy players who have been given their chance in the first team... What advice would you give to players in the lower ranks?

Álex López: Firstly to keep working hard and try to enjoy football without being obsessed about making it because these things take time. It is important that we realise how lucky we are because our club has confidence in its youth academy. The only thing they have to worry about is working hard, enjoying themselves and improving. I think the mix of people coming up and those coming from outside could be the key to success.

LFP.es: What is Luis Enrique like as a coach?

Álex López: We are very happy with him and with his coaching staff. They are very hard working and very approachable. They make us all feel good, both those who play and those who do not so much. The harmony and the good atmosphere they have created is very good and positive and I think the union and the bond between the coaching staff and the players is a very significant contributor to our current situation. Although, without a doubt, the most important thing is that the team has room for improvement and is going to keep growing.

LFP.es: Your team has been playing well since the start of the season, but the performances were not backed up by results. Does there come a time where playing well takes a back seat?

Álex López: In the dressing room we were relaxed because we were doing the right things and it was just a question of waiting for the results to come. The fans always demand results and it is understandable that they were not happy. We supported the system and time has shown that we were right to do so, we are in a good situation, we are still playing well but we have corrected certain areas we had problems in and that is leading to progress in the team so we are able to comfortably achieve our goal.

LFP.es: You are having a great season, you have played in all the matches bar one and have found the net five times. In terms of football, is Álex López at the peak of his powers?

Álex López: Yes. I feel great although the most important thing is that I have more support from the coaching staff and that gives you confidence in your game. In this system and in the position I play in I have the chance to be able to score more goals. Even so, I am never content, I am ambitious and I want to keep working to help the team and improve my stats.

LFP.es: One of Celta's key players is Rafinha. He was recently named Liga BBVA Player of the Month for February. Is the team worried about losing him next season?

Álex López: Rafinha is having a spectacular season and he is still young, therefore he has tremendous potential to go as far as he wants. We cannot forget that he is on loan, so we will enjoy having him around for the rest of the season. We would love to have him here for a long time, but unfortunately it is not up to us.

LFP.es: The next match is against Atlético de Madrid. In your first game with them you lost 2-1. Perhaps now is the best possible moment for you to host them…

Álex López: Yes. Despite the last result, the team is confident and playing really well. We are undefeated at home for a several matches. As for them, we will try and take advantage of their current situation; they have just played a derby, they have some players suspended and there are international games this week. Hopefully we can make use of our strengths. The key is overcoming Atlético's intensity. I think we can get a positive result if we are aware of how difficult it will be and if we all give 120%.