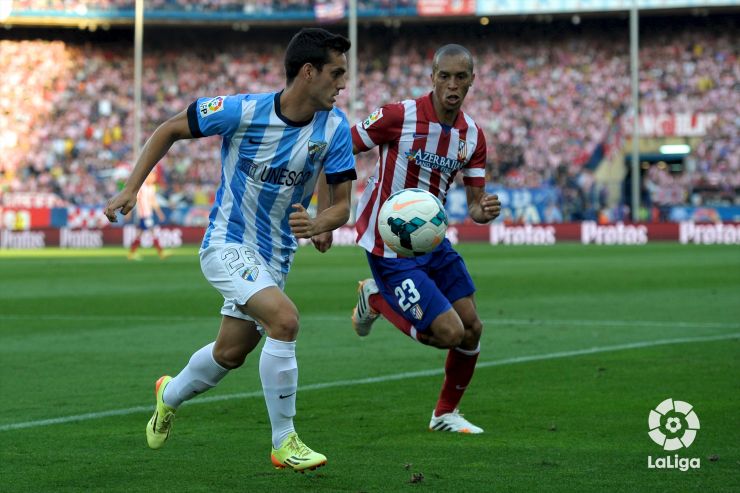 "We are a young and hungry squad"

Juanmi, Málaga's striker, spoke to LFP.es to discuss the new squad and talk about the keys to the team’s season.

At just 17 years of age, Juanmi Jiménez (Coín, Malaga, 1993) made history with Málaga CF by becoming the youngest player to score two goals in a Liga BBVA match and to play and score in a cup game with his team. That was back in 2010, and now, four years later, the academy graduate can boast to being one of the stars of the Andalusian team’s strikeforce. His skill and electricity in the area will be essential for Javi Gracia’s side this season. He discussed the year to come with LFP.es.

LFP.es: How are the team feeling after the opening matches?
Juanmi: We did some great work in the preseason and we’ve started well at home, in front of our great fans, by beating Athletic Club. That gives us peace of mind and keeps us motivated to be strong throughout the season.

LFP.es: What are the goals for this season?
Juanmi: We haven’t set a big long-term goal. The only goal for the team is to work day by day to progress and to be better. Now, after the defeat in Valencia, we’re only thinking of the three points at home against Levante.

LFP.es: What has Javi Gracia brought to the group?
Juanmi: He is a great coach who insists on the team having the ball and playing. The group received him very well and we have picked up his ideas very quickly. Javi is giving us a lot of things and we started seeing that on the first day he arrived, from the preseason through to the start of the Liga BBVA.

LFP.es: Are we going to see a Málaga who like to have the ball or will the focus be more on defensive aspects?
Juanmi: From the start he has imparted the idea of having possession and dominating. He likes to play and the whole team has caught on quickly. But, also, he doesn’t neglect the defensive aspect and makes us work to be more compact.

LFP.es: It seems like the club has made a commitment to younger players for the regeneration of the team.
Juanmi: We are a young squad with a lot of academy players coming through and raring to go. It is good for any dressing room because it gives you a hunger, but we’re only thinking about improving and progressing.

LFP.es: What does it mean for an academy graduate like yourself to because one of the stars of Málaga’s attack?
Juanmi: It is a dream for any kid and, ever since I joined the academy, I have wanted to get here.

LFP.es: Who are your role models?
Juanmi: Raúl. He started very young and set the standard for Spanish strikers. I always watched him and his movement. But I’ve also tried to learn from great players at Málaga and those I’ve shared the dressing room with, such as Ruud van Nistelrooy and Roque Santa Cruz.

Raúl is one of my role models; I grew up watching him and the way he moved

LFP.es: Do you have any superstitions before you take to the pitch?
Juanmi: Since I was little I’ve always liked to play with the same socks and underwear in every match (laughs).

LFP.es: You have two historic records to your name, are there any more in particular you would like to break?
Juanmi: I’ve never thought about that. I know I did something significant, but I don’t have my eye on any particular record, now I just want to improve day by day, as I said, and help the team with a lot of goals. Although there is also a lot of competition in the squad and that means you have to be at one hundred per cent.

LFP.es: How is the team’s new signing, Guillermo Ochoa, getting on?
Juanmi: He joined midway through the preseason and the team welcomed him with open arms. We are really hopeful about him because he had a great World Cup and we are sure that when he gets the chance, he will do well, as Kameni is.