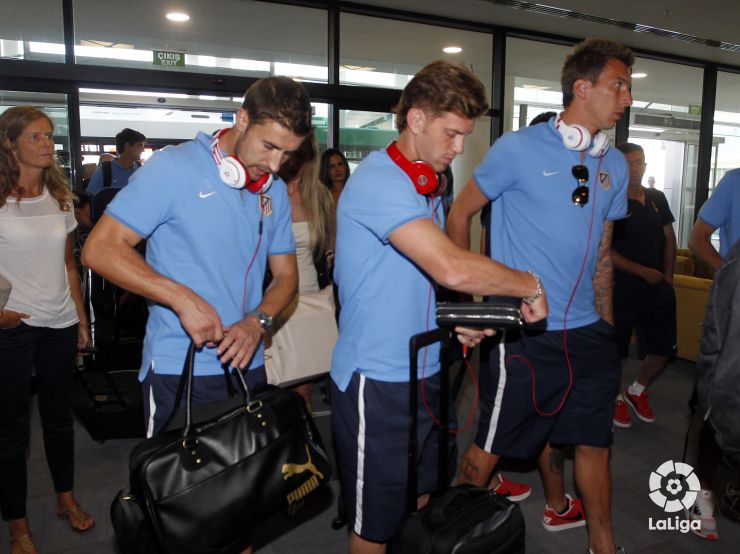 Following their LFP World Challenge tour in San Francisco and Mexico, the travelling party will represent the Liga de Fútbol Profesional in Izmir, where they take on Galatasaray SK.

Club Atlético de Madrid landed at Adnan Menderes Airport in Izmir at 17:40 local time on Tuesday. They were greeted by a number of fans who did not want to miss the side’s arrival in Turkey.

One of the star attractions was Turkish player Arda Turan, who seemed delighted to represent his side and Spanish football in his home country: "I'm very happy with the chance. I grew up in Turkey as a player and a person, and now I come back with a better technique and with Spain's best side", said the player.

After visiting the USA and Mexico, where Atlético's stays were a resounding success, the side will play against Galatasaray SK on Wednesday 6 August at 21:00 local time (20:00 Spanish time).

They will do so at the Izmir Ataturk Stadium, where as part of the LFP World Challenge the Rojiblancos will demonstrate the power and quality of the Spanish top flight against one of Turkey's most successful clubs.

Boss Diego Pablo Simeone also said that the club are "very happy" with the chance that the LFP World Challenge has brought the side: "Galatasaray have always been a side with a lot of history and their fans are very passionate. It will be a nice test for us as we prepare to start the league campaign", said the coach, who also praised Arda Turan: "He is a different player. His technical ability and his desire to work hard for the team make him so important".

Sporting director José Luis Pérez Caminero and LFP ambassador Augusto César Lendoiro also travelled with the side. They, along with many of Atlético's players, will take part in the 'Spain Experience', where sport and business comes together to promote the Marca España and the Spanish football league on all five continents.