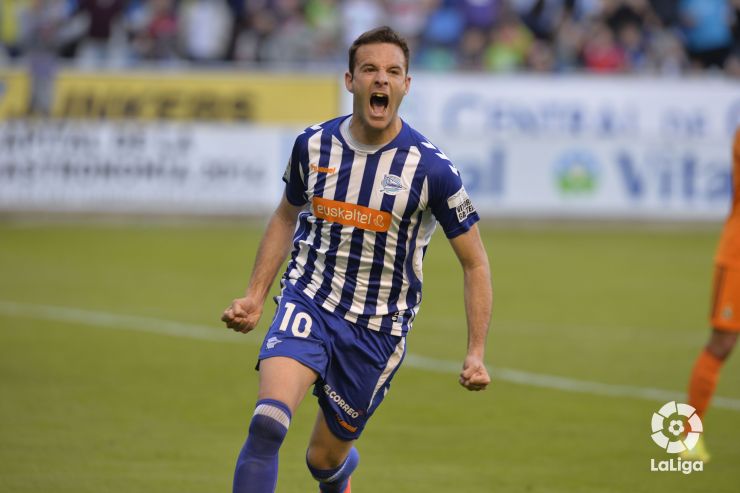 After a deserved 0-2 win against Recreativo, Alavés keep their hopes of salvation alive ahead of the final stretch of the season.

Effort, consistency, dedication and hope are four words that sum up Deportivo Alavés, one of the teams fighting for survival during the tightest Liga Adelante campaign in years.

The Basque side headed into matchday 35 of the season in a very precarious situation, needing an away win against Recreativo de Huelva in order to climb out of bottom place in the table and keep any hopes of staying up alive. It was by no means the ideal setting for a team in search of victory given that the Andalusians are still in the hunt for a promotion place, but even so, El Glorioso was able to come away with an impressive 0-2 win. It was not just any old victory for Alberto López’s men, as the result allowed them to close the gap on a number of other teams near the bottom and climb to within three points of the safety zone.

The win was also a reward for the side’s consistency. Before that, Alavés had not won a match since the 1st of March, when they beat Alcorcón 1-0 in Mendizorroza, a victory that was followed by a six match run consisting of four defeats and two draws. Overcoming that psychological barrier, the Basque side will use the result against Huelva to spur them on as in their attempt to move up the table in order to claim a place in next season’s Liga Adelante. This weekend’s clash at home with Mallorca, for which the fans will be more vocal than ever, will be the first of the remaining seven ‘finals’ before the conclusion of the season.

The 25-man squad deserves credit for the third ingredient of this magic formula: dedication. Despite their low position in the league table, Alavés have racked up 47 goals in the Liga Adelante, a scoring rate they share with two teams that sit in the upper end of the table, Barcelona B and Recreativo, a figure that has only been bettered by Sporting Gijón (53) so far. With regards to the side’s impressive goal tally, Borja Viguera deserves praise.

The La Rioja striker is enjoying one of his best ever seasons, having already clocked up 22 goals in 35 matches to become the division’s top scorer. Viguera, who was one of the heroes during last year’s promotion campaign to the Liga Adelante, will have another chance to etch his name in the club’s history books. Should they stay up, his performances will symbolise the babazorros’ fighting spirit.