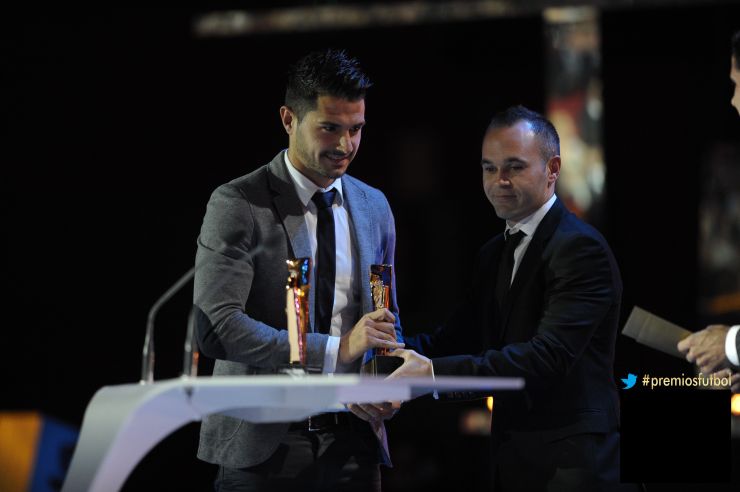 The current Sevilla attacker takes the gong following his fantastic campaign, which included 15 goals, in the colours of Las Palmas last season.

Víctor Machín 'Vitolo' has been given the title of Best Attacking Central Midfielder in Liga Adelante 2012/13, following an excellent campaign in the colours of UD Las Palmas. Vitolo beat off competition from Juanfran Moreno (now at Real Betis Balompié having been at Real Madrid Castilla) and Rafinha (former Barcelona B player now on loan at RC Celta de Vigo).

"I am very happy with this prize. You always try to do your work as well as possible and people have really helped me. Luckily I have settled well at Sevilla so I am very happy. So far we are on the right path. I would like to thank the president of Las Palmas, Miguel Ángel, who has helped me a lot. In terms of my other peers, everyone has helped me a lot and I couldn't single one out", recognised Vitolo.

The Canary Islander came through the ranks at the Las Palmas youth academy, where players like Juan Carlos Valerón learnt their game. After making the step up to the first team in 2010/11 under Paco Jémez, his growth has been exponential. In his first season he played 10 times, scoring once, whilst in his second campaign he made 36 appearances notching up 10 strikes. But it was last season where he was defined as a player, taking to the field on 41 occasions, and getting his name on the score sheet 15 times to mark a meteoric rise.

His fantastic season brought attention from other clubs, and he now plies his trade in Liga BBVA with Sevilla FC, who snapped him up in the summer window. With this prize as Best Attacking Central Midfielder in Liga Adelante now in his possession, the man from Las Palmas will aim to reproduce his sparkling form from Liga Adelante in the top level of Spanish football.