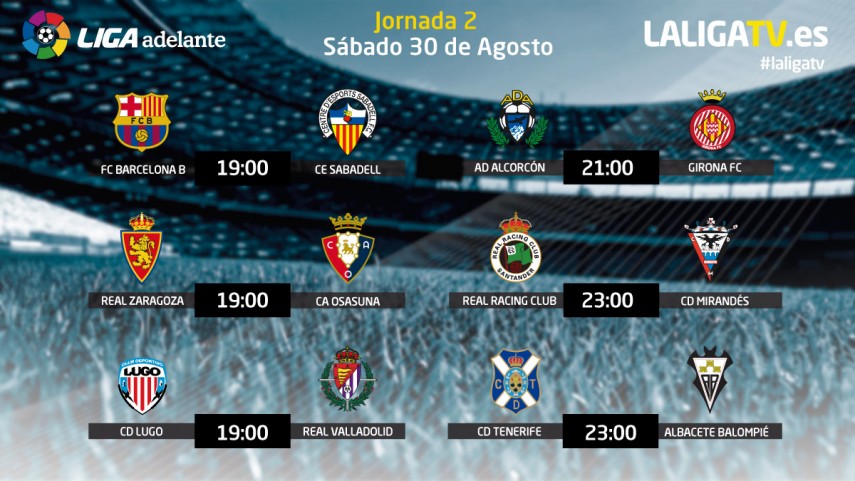 Vibrant Saturday in the Liga Adelante

Here's a preview of the six exciting clashes that will open the second matchday of the championship.

Lugo play their first home game hoping also to claim their first victory, after a 0-0 draw to CD Mirandés on matchday 1. The Pucelanos, meanwhile, having defeated RCD Mallorca 2-1, will look to continue their success at home.

Valladolid, Osasuna and Alcorcón won on matchday 1 of the Liga Adelante

The Galician team's boss, Quique Setién, will be without the inured Jonathan Valle and Ernesto Gómez.  The visiting manager, Joan Francesc Ferrer 'Rubi', has selected some of the club's new signings, such as Javi Varas and David Timor.

Zaragoza begin a new season at La Romareda in search of their first victory, after drawing 0-0 against RC Recreativo de Huelva on matchday 1. They will face a Rojillos in high spirits after their 2-0 victory over FC Barcelona B.

"The players can sense a different climate, the excitement that's in the air. And this translates into a desire to play a good game; if it brings a victory, it would be fantastic", said Víctor Muñoz, the home side's manager. For this clash, Jordan Lotiès and David García return for the visiting manager, Jan Urban.

An all-out Catalan derby on matchday 2 of the Liga Adelante, with the two sides looking to claim their first points of the season. While the Azulgrana reserves lost 2-0 to Osasuna, the Arlequinados were defeated 2-3 by Real Betis Balompié.

"We're facing a very challenging opponent", said Eusebio Sacristán, the home side's manager. Miquel Olmo, the visiting boss, was full of praise for his opponents: "It's a team with a lot of quality and a well defined idea of how to play football. They play at a very high pace with the ball and they’re very accurate".

Alcorcón and Girona go into matchday 2 in superb form after beating Albacete 3-2 and Racing 1-0, respectively, on matchday 1.

The Madrid side's boss, José Bordalás, will be without midfielders Sergio Mora, while defender David García is the big new addition to Girona manager Pablo Machín's side.

The results did not go the way of Tenerife or Albacete on matchday 1, in which the Canary Islands side lost 1-0 to SD Ponferradina and the La Mancha club were defeated 2-3 by Alcorcón. They will therefore look to claim their first points to boost their morale.

Diego Ifrán, one of the big new signings at Tenerife, will be unavailable to Álvaro Cervera. The Albacete manager, Luis César Sampedro, meanwhile, will be without Keko, but has included a brand-new signing, goalkeeper Diego Rivas, in his matchday squad.

Racing were unable to celebrate their return to the Liga Adelante with a victory, after they lost to Girona by the narrowest of margins, so they will look to beat Mirandés who will aim to do the same after their draw to Lugo. "Racing have a great team. Last year they had a great season; they have a good-sized squad and have made new signings. At home they'll want to be strong from the outset", said Carlos Terrazas, the visiting manager.