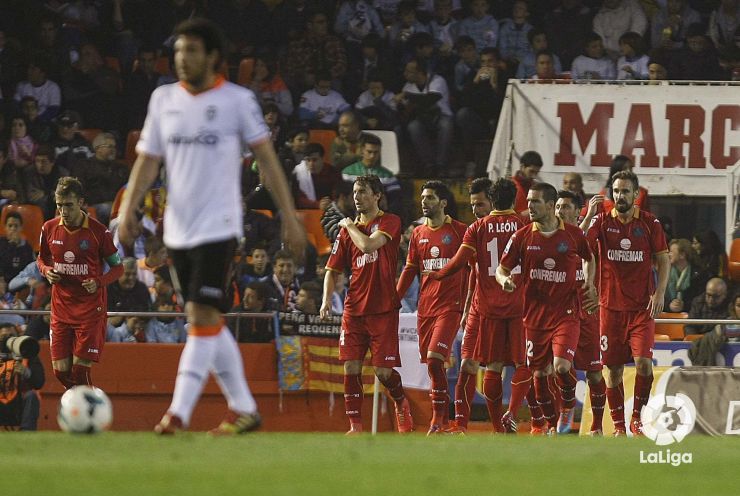 Valladolid and Getafe stay in the fight

With their victories, the two teams climb away from the relegation zone and take in some air going into the final weeks of the season; Valencia moved away the European spots and Real and Villarreal draw against Osasuna and Elche.

While the fight for the Liga BBVA title produces great matches every weekend, the battle to stay up and the competition for the European spots are not far behind. Real Valladolid CF were the big winners on matchday 31 of the Liga BBVA in their bid for survival, while Real Sociedad de Fútbol and Villarreal CF squandered their chances to keep climbing the table. The big upset of the day came from Getafe, who won at the Mestalla.

The Sunday started at the José Zorrilla Municipal Stadium where Valladolid managed to take their unbeaten run to eight matches on the trot. UD Almería, the Castilian team’s direct challengers in the fight for survival, were unable to break their run due to a goal from Manucho that clinched victory for Juan Ignacio Martínez’s side. A win that lifts Valladolid out of the relegation zone on goal difference.

CA Osasuna were unable to make the most of their home advantage at El Sadar against Real Sociedad. The Navarrese side and the team from San Sebastián drew thanks to goals from Oriol Riera and Chory Castro. Pablo Gracia’s side finished the day second-to-last, while the txuri-urdines remain sixth, level on points with Sevilla FC. The result was the same at El Madrigal in the game between Villarreal and Elche CF. Marcelino García Toral’s team had an opportunity to climb back into the European spots but they were unable to overcome a combative Elche.

The day ended at the Mestalla, where Getafe CF surprised Valencia CF, winning 1-3. The Madrid side, who had not won a match since 29th November, got the better of Juan Antonio Pizzi’s team. Parity and intensity dominated the match but a lack of accuracy and a good performance from Jordi Codina punished the Valencians who ended the day ten points short of the European spots. The Madrid team, meanwhile, climb out of the relegation zone into sixteenth.