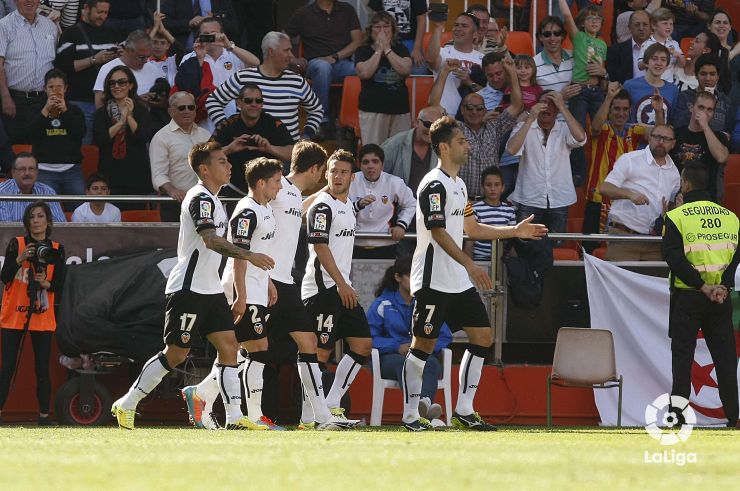 Valencia get back to winning ways

After three league games without a victory, Pizzi's men defeated Elche 2-1 at the Mestalla.

Valencia CF won their regional derby versus Elche CF on matchday 33 of the Liga BBVA, a result that ends a run of three games without a win in the championship.

The two teams got straight to the point, beginning hostilities from the off. Valencia, with lots of new faces in their starting eleven due to their match on Thursday in European competition, had the first chance on goal with a header from Jonas that was parried by Manu Herrera.

It did not take long for the goal to arrive, with Pablo Piatti shooting from the heart of the area. After the score Elche responded and took control of the game. And not only did they equalise with a Coro strike after a series of inaccuracies from the home defence, but they came close to a second both in a move by Cristian Herrera and from a Carlos Sánchez shot from the goal line.

After the break, Valencia regained control and the initiative on the scoreboard. They did so through Dani Parejo, who hit a powerful shot from the penalty arc into the back of the net. Vicentre Guaita also performed well for the home side between the posts, stopping a penalty from Damián in the 71st minute to keep the three points in the Mestalla.