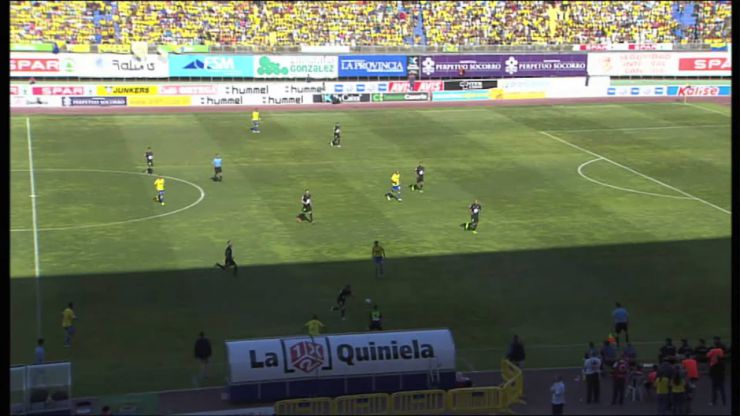 The Mexican striker scored to make it 1-1 against Las Palmas in the final minute of the game and confirmed the Andalusian side’s place in the Liga BBVA next season.

Córdoba CF became the third team to be promoted to the Liga BBVA after drawing 1-1 in a thrilling tie against UD Las Palmas at the Gran Canaria Stadium. The Canary Islands team took the lead with a goal on 48 minutes from Apoño, but Uli Dávila worked a miracle in injury time to earn promotion for the Blanquiverdes.

It was a great first half at the ground in Siete Palmas. Juan Carlos Valerón was the orchestra conductor for a Canary Islands side that enjoy the best chances in the early stages. Momo and especially Nauzet Alemán, with a shot that hit the posts, could have opened the scoring for the home side that were dominating the match. Córdoba, meanwhile, remained patient and also enjoyed a clear opportunity, but Mariano Barbosa stepped in when his team most needed him to keep the score at 0-0.

As soon as the second half got under way, Apoño appear to score the first goal. Carlos Aranda penetrated down the right and passed to the edge of the box, before the midfielder struck to score a goal that made the crowd explode with joy. The Andalusian team attempted to respond through Uli Dávila, but his strike was stopped by Barbosa. Momo could have extended his team’s lead, but he was unable to take advantage of a one-on-one with Juan Carlos.

In the dying moments of the game, Córdoba’s Mexican striker Uli Dávila got on the end of a rebound off Barbosa inside the box to score the equaliser and earn promotion for his team due to the away goals rule. It was Córdoba, then, that were able to celebrate their return to the Liga BBVA after a 42-year wait.