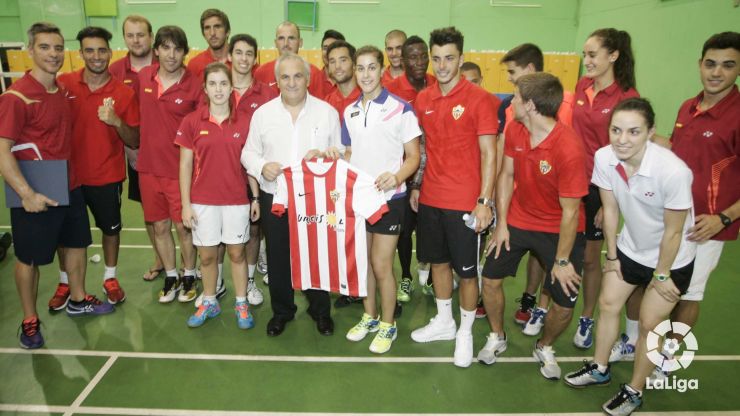 The Andaulsian outfit and the Spanish team met up to share stories in Thailand courtesy of the LFP World Challenge Tour.

Bangkok was the setting where UD Almería and the Spanish badminton team met up and enjoyed an afternoon together in which Spanish sport reigned supreme under the umbrella of the LFP World Challenge Tour.

After their morning training session, the Andalusian team, along with club president Alfonso Gracía and some members of the board, made their way to the Banthongyod Badminton School to watch an exhibition performance, something that Fernando Sanz, the LFP ambassador in Southeast Asia, did not want to miss out on either.

UD Almería were treated to this novel display by the Spanish badminton team, who are captained by Carolina Marín, the 2014 European Champion. After Marín finished her performance, the football players took part in the event and started to show off their abilities on the court in a friendly atmosphere between both sets of players.

"This initiative by the Liga de Fútbol Profesional has been extremely positive because as well as helping to promote Spanish football here, where there are loads of fans, it allows us to get to know lesser known sports like badminton. Being able to train here in Thailand alongside the best players around is the greatest experience one could ask for. It is not that easy to find tough competition in Spain", stated Carolina Marín.

At the end of the event, Fernando Sanz presented the national team coach, Fernando Rivas, with a plaque to show the Liga de Fútbol Profesional’s gratitude. Alfonso Gracía followed that up by presenting Rivas with the UD Almería jersey to thank him for the eye-opening day, which was part of the LFP World Challenge Tour.

As well as that, the Spanish badminton team will accompany Francisco’s side to their friendly match against Muangthong United FC in SCG Stadium. The match will kick off at 14:00 CET on Wednesday 30 July.