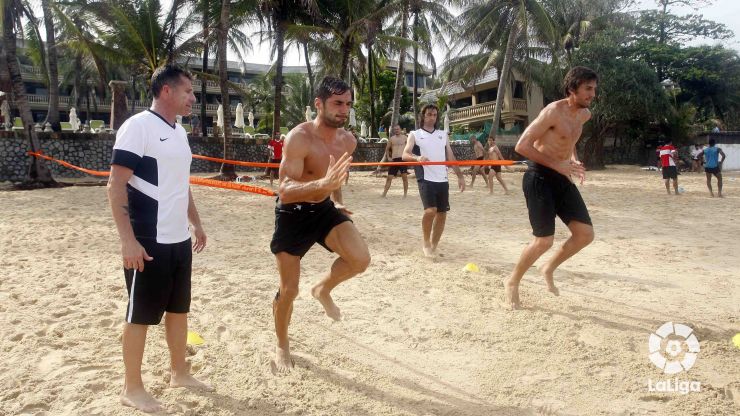 UD Almería enjoy a training session on the beach in Phuket

The Andalusian side carried out two sessions on their third day on the island in order to prepare for the match against Phuket FC on 6 August.

UD Almería started their third day in Phuket with a training session on the Kata Beach in preparation for the match they will play on 6 August in the Asian country. The match will bring an end to the Andalusian team’s LFP World Challenge Tour of Thailand, which started on 28 July thanks to the Liga de Fútbol Profesional.

The squad and coaching staff carried out the session at 8 am (local time) in unbeatable surroundings, where they combined resistance and skills exercises. A sizeable crowd built up to watch the session, as has become the norm since the team touched down in Thailand, where there has been a great atmosphere.

At 18:00, the team trained again, this time on pitch of Phuket FC, the side they will be playing on Wednesday at 14:00 CET. UD Almería hope to use the game to continue finding the fitness required for the first clash of the season against RCD Espanyol in the Estadio de los Juegos Mediterráneos, on 23 August at 23:00.

The day ended with the Phuket Fantasea Show which was attended by the president of UD Almería, Alfonso García, and some members of the club’s board. The show is inspired by Thailand’s exotic heritage, combining different traditions from the country with state-of-the-art technology and special effects, in which elephants have a leading role.