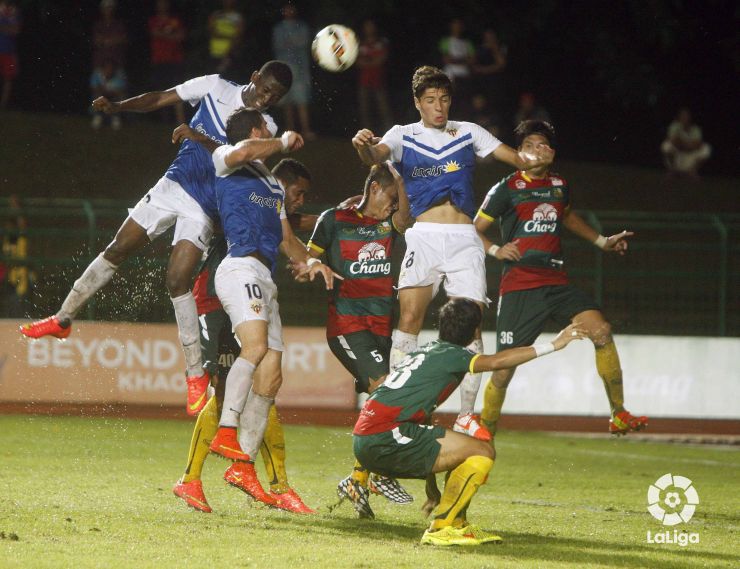 UD Almería end their tour of Thailand with a comfortable win

Hemed, Quique González and Zongo made it 0-3 but Phuket FC cut the deficit in the dying breaths of the match that ended the LFP World Challenge event.

UD Almería beat Phuket FC 3-1 in the match that ended the Andalusian side’s LFP World Challenge Tour of Thailand. It was a 12 day experience in the Asian country that helped Almería prepare for the first match of their 2014/15 campaign, thanks to the Liga de Fútbol Profesional.

Amid great media expectations and an unbeatable atmosphere in the stands, Ignacio Arrola, the LFP’s strategic consultant, handed a plaque to the president of Phuket FC as a sign of gratitude on behalf of the Liga de Fútbol Profesional before the match.

Rain again played an important role in a first half in which Francisco Rodríguez’s team put in a great performance. UD Almería had some good chances to take the lead, but the inclement weather conditions affected the Andalusian side’s game and they were unable to open the scoring before the break.

In the second half, the downpour eased in the Surakul Stadium and Tomer Hemed scored the first goal for the visitors. From that moment, UD Almería looked confident and in the final minutes Quique González and Jonathan Zongo made it 0-3. Phuket FC cut the deficit before the final whistle (1-3) but they were unable to prevent the Andalusians’ victory celebrations, in a match in which the Thai people showed their support and affection for the visitors once again.

"It is a wonderful way to say goodbye to this country that has received us so well and to which we are tremendously grateful. We have built a great bond between Spanish football and Thailand. We hope to return here and that they continue to follow us as they have during our stay in the country", said Francisco in the press conference.

Likewise, Quique, the scorer of the second goal, was positive about the match: "I want to contribute and help the team. Both I and the rest of the players have played well. We wanted to go back with a victory and we did it. The tour has been very positive. These events unite the team and also, the affection from the people has been exceptional".

Miguel Ángel García 'Corona' was the last to express his gratitude at the end of the team’s successful trip. "Whenever you get a victory you  can go home happier. It’s been a great experience and we achieved the goal of promoting Spanish football so we’re going home very satisfied", said the captain.