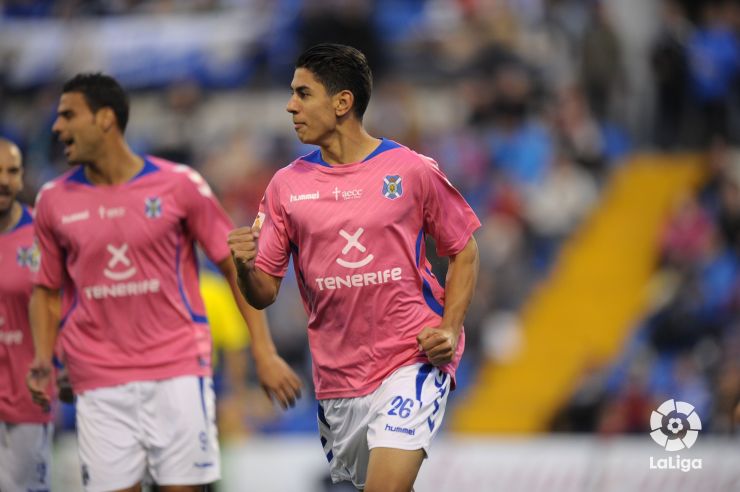 "To wear the Tenerife shirt is a dream come true"

Tenerife's Ayoze Pérez, one of the real breakthrough players in this season's Liga Adelante, talks about his best moments at the Canary Island club with LFP.es.

Quick, tricky, a natural goalscorer with great technical qualities. That is how you would describe Ayoze Pérez (Santa Cruz de Tenerife, 1993), CD Tenerife's young gem who is really marking an impression on Liga Adelante this season. The striker, who has scored 10 goals so far this season, speaks to LFP.es about his best moments with the 'chicharrero'.

LFP.es: After 24 round of games Tenerife sit 11th with 33 points. What's your assessment of the season so far?
Ayoze: It has been up and down. We started the season quite badly, but then we went on a good undefeated run and this helped us climb up the table. Now we sit comfortably, but we can't rest on our laurels. We can't think about anything other than making sure we stay up. Who was going to say that we would be sitting so high up just one point off the playoffs?, but the objective must remain the same, to get to 50 points.

LFP.es: You've scored 10 times in Liga Adelante, are one of the season's breakthrough players, and every game your influence on the team gets bigger. Did you think it was going to be such a season?
Ayoze: Not at all! At the start I didn't think I was going to be a starter, until I got the opportunity to do so. I scored and then I went on a good goalscoring run. I’m very happy that I can help bring goals to the side.

LFP.es: You are one of the crowd's favourite players, and it looks like a lot of clubs are following your progress. How is it to live with such praise and rumours surrounding you?
Ayoze: Well, truth be told it's something new for me and it has all come around quickly, but I'm coping well. With my feet on the ground, I know that I have to carry on working and show consistency. If I do this I will reap the rewards tomorrow.

LFP.es: What does it mean for an academy graduate like Ayoze to wear the Tenerife shirt?
Ayoze: It's a dream come true. In the youth sides you dream of wearing this shirt and playing at the Helidoro. When you achieve it, it's an incredible feeling. More and more of us are living this dream now.

LFP.es: You made your first team debut on the 21st of December 2012, coming on as a substitute in the 71st minute against RSD Alcalá. What do you remember about it?
Ayoze: When the boss sent me to warm up I started to feel a bit nervous. It was very cold and I was trying to warm up. It wasn't the best result (0-0), but I will always remember this day.

LFP.es: You carried on developing and on the 5th of May 2013 scored your first goal against San Sebastián de los Reyes. In that moment it seemed as if there was a mixture of relief and happiness.
Ayoze: Well I was able to get some minutes, and it was basically in stoppage time when I scored my first goal, and you can see in the celebration that there was a lot of relief, after not taking opportunities that I'd had in other games. It was a weight off my shoulders. It is a goal that I'll always remember, also because it was a nice finish.

LFP.es: On the 4th of December 2013 you were involved in a very special game. Tenerife downed UD Las Palmas 3-0, with two goals and a top-drawer performance from Ayoze. You must have special memories from this day.
Ayoze: This match is etched in my memory and will be forever. The atmosphere was incredible, I couldn't believe how many people were there supporting the team. I was lucky enough to score twice, but if you watch the match you have to highlight the work done by the whole side for 90 minutes. It was incredible, we didn't stop running and pressing. I will always remember it. It was my first derby and it was one to remember.

LFP.es: What would you like to achieve in the world of football?
Ayoze: A lot. Now, to carry on here, score goals, help the side stay up, and then in the future we'll see. I hope there will be something good for me. It is all I want and hopefully it will go my way.

LFP.es: "Ayoze won't be here next year. He's possibly the best player I've ever coached. If he carries on as he is doing he will go to a very good club and will take a forward step in his career". These are the words of your manager Álvaro Cervera. What do these words mean to you?
Ayoze: When I heard them I was very surprised. It is so flattering when your own gaffer says these things about you, and for that I'm very happy. I don't know what the future holds, but it wouldn't be bad if he was right, and something good came along for me, as I would love to make it to the top in the game of football. With hard work and effort I will try to make sure I do.