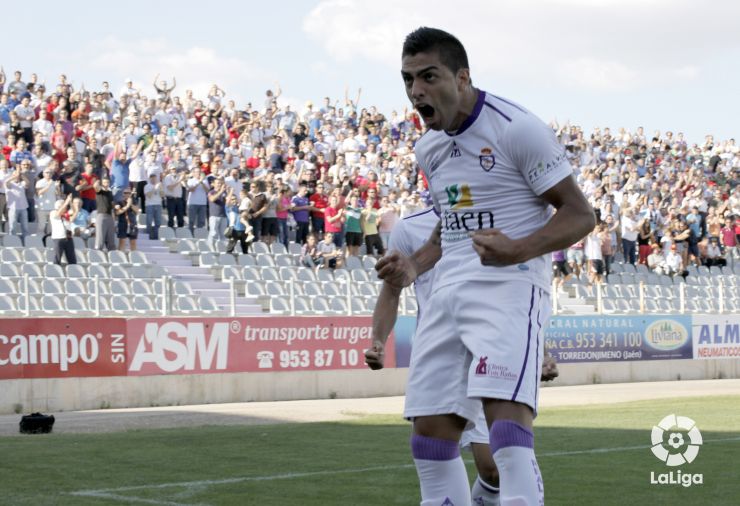 Jona, of Jaén, is one of Liga Adelante's leading goalscorers, and he spoke to LFP.es about his dreams and aspirations for 2014.

Jonathan Mejía Ruiz 'Jona' (Malaga, 1989) is one of the men of the moment in Liga Adelante. On loan at Real Jaén CF from Granada CF, his excellent form (nine goals) has not been missed by the Andalusian side, who recently gave him a new contract which runs until 2018. The Spanish-Honduran forward spoke to LFP.es about Liga Adelante and his two dreams: to play in Liga BBVA and represent Honduras at the 2014 FIFA World Cup in Brazil.

LFP.es: How has your adaptation to Real Jaén been?
Jona: From the moment I arrived everything has been incredible, even before I was scoring goals. Everybody is very caring, they say hello in the street and speak very well. I adapted well to the side, the city and the people here.

LFP.es: You've scored nine goals and are one of the in-form players in Liga Adelante, did you imagine getting off to such a good start?
Jona: No, to tell you the truth I didn't because I played for a while in Segunda División B and this is only my first year in Liga Adelante. Luckily everything is going well, but I'm still young and I hope this won't be my best season. Up until now maybe yes, it's the best.

LFP.es: You went on loan to Vitória SC, where you didn't really have many opportunities, did your stint in Portugal help you?
Jona: It helped me realise that when I returned to Spain I would have to give everything in order for the same not to happen again. When the possibility to join Jaén arrived, I knew I'd have to be at 100% in order to get game time.

To play at the World Cup for a player like me, who has been in Segunda División B for such a long time, would be something special.

LFP.es: In a very even Liga Adelante, with such few points between each end of the table, what do you think will end up making the difference?
Jona: The equality is incredible. There are sides such as Deportivo and Recreativo who went on a bad run but are still at the top. At the end of the day, the consistency shown by teams at the top will be the difference between them and the sides at the bottom.

LFP.es: Is Liga Adelante the best second division in Europe?
Jona: I haven't really seen any other leagues, but for me, yes it's the best.

LFP.es: Your dream is to play at the 2014 World Cup in Brazil with Honduras, how do you see your chances?
Jona: I don't think I've got much of a chance. The strikers there are big names and that carries weight. They qualified and right now, you might say, I'm not known over there. Lots of people from there support me, but before everything I'm realistic and I know perfectly well that it won't be easy. But I'm not going to give up and I know the only way I can put pressure on them is to score goals. I will give my everything to score as many as I can until the day the squad is announced.

LFP.es: What would it mean for you to wear the Honduran jersey at the World Cup?
Jona: For any player, to play with your national side at the World Cup is the maximum. It would be the best thing imaginable. To play at the World Cup for a player like me, who has been in Segunda División B for such a long time, moving from place to place year on year, would be something special.

LFP.es: You made your debut for Honduras last June in a friendly against Israel. What do you remember from the game?
Jona: It was incredible. The day before the game I was very nervous as I was about to represent my country. It was brilliant. I came on the pitch and got a great ovation, despite the fact we were playing in the USA. Since then, I have consistently thought, if I received such an ovation there, to actually play in Honduras must be something else. I don’t want to miss out on knowing how that feels.

LFP.es: Another of your dreams is to play in Liga BBVA, do you see yourself as leading the line for Granada in the near future?
Jona: I know its going to be difficult, but the possibility is there. I'm 24 years old and both Granada and Quique Pina have shown they have confidence in me. They’ve loaned me out here to let me show what I can do to get a space in the Granada squad, and that's what I’m doing. I'm convinced that I'll make it because that’s my dream. If I finish my career without playing in Liga BBVA I won't feel complete.

LFP.es: What are your other wishes for 2014?
Jona: The only thing right now is to stay up. Jaén the team and city deserve it. They're football mad here and they've suffered long enough. I hope they enjoy this year.