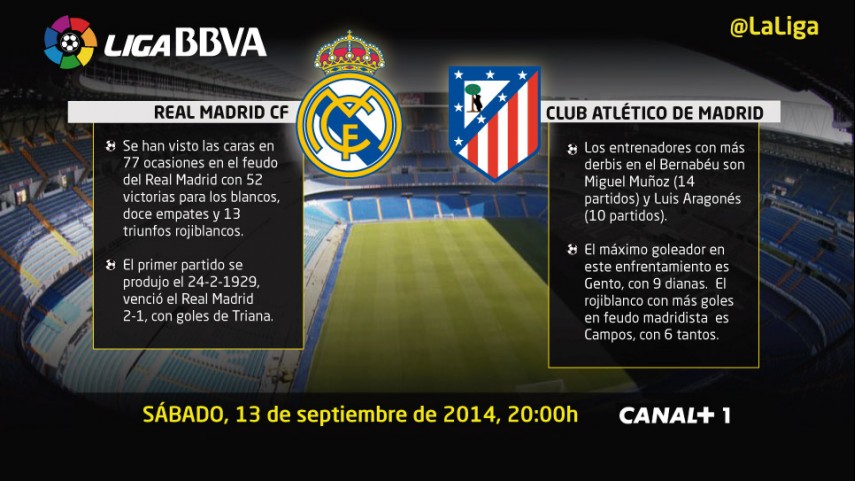 Titanic clash at the Santiago Bernabéu

Real Madrid and Atlético face off in one of the most exciting and attractive games in the third round of Liga BBVA.

The Estadio Santiago Bernabéu hosts the Madrid derby between Real Madrid and Atlético Madrid this Saturday (20:00h). Both sides, who will face off for the seventh time in 2014 go into the match with contrasting emotions: the Whites will be looking to come back after losing to Real Sociedad, while the Rojiblancos will look to remain unbeaten this year.

The Whites' manager Carlo Ancelotti will be without Dani Carvajal and Sami Khedira. Mexican forward Javier 'Chicharito' Hernández is in the squad and could play his first minutes in a Real Madrid shirt. On the Atlético side, Diego Simeone has recovered Arda Turan, who missed the first two games of the season.

View from the dugout

"The side aren't going to change style nor philosophy. We want a good game and return to playing well, with intensity as we normally do", said Ancelotti in his pre-match press conference. Meanwhile Diego Simeone said that Atlético need to play "at their best" to "overcome the weapons" of Real Madrid. "It will be a different came to the Supercopa. We will have to be ready to stop their play", said the Argentine.

Goals aplenty and sports betting for titans with nerves of steel.

In three of the last four derbies there have been goals from both teams, and if both sides score this Saturday we’ll win € 1.85 per euro wagered.

In the last ten league derbies, goals have been scored in the first half an hour. If Real Madrid are in the lead on the 30th minute, the odds are 2.80, while victory for Atlético de Madrid on the half hour pays 5.50.