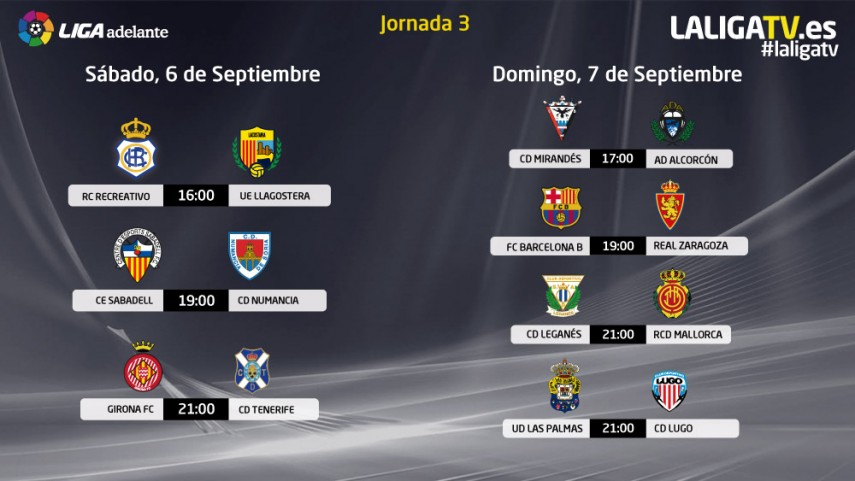 The official La Liga channel will offer seven games on matchday 3 of the Liga Adelante.

All the excitement of the football returns. La Liga TV will be the perfect accompaniment to a sporting weekend once again. Up to seven Liga Adelante games will feature on the official Liga de Fútbol Profesional channel, with no geographical restrictions and totally free of charge.

The footballing weekend on La Liga TV starts on Saturday at 4 pm with the clash between RC Recreativo de Huelva and UE Llagostera. A thrilling game in which Huelva, after two draws on the opening two matchdays, will look for their first victory. They face a Catalan side in high spirits after claiming their first ever victory in the Liga Adelante (2-0 versus CD Leganés).

At 7 pm the excitement will continue with the televised match between CE Sabadell FC and CD Numancia. Neither team has claimed any points yet, and they will aim for their first victory of the season on matchday 3. At 9 pm, Girona FC face CD Tenerife in a game in which the Canary Islands side will try to break the run of two victories in two matches achieved by Pablo Machín's team.

At 9 pm the weekend will come to a close with two games. CD Leganés welcome RCD Mallorca to the Butarque Stadium, with both clubs looking for their first victory. At the same time, UD Las Palmas go up against CD Lugo in what promises to be a very close game.