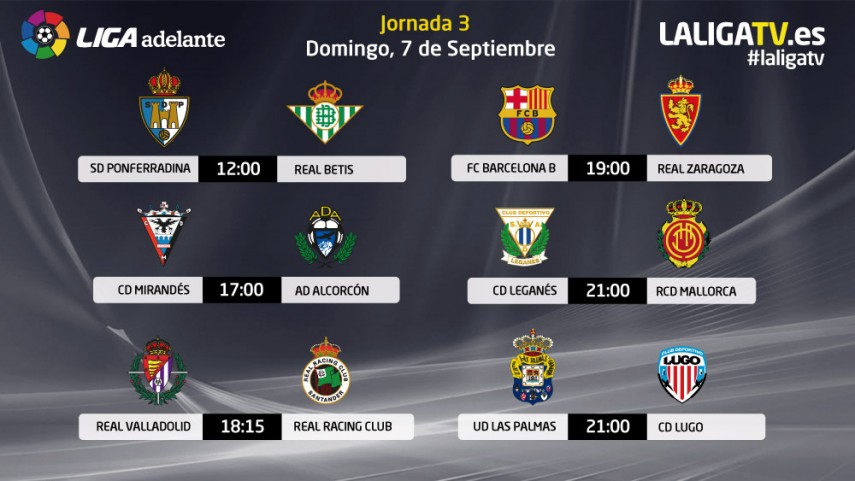 This Sunday the football is offered up by the Liga Adelante

After five thrilling matches on the Saturday, matchday 3 of the championship offers six more exciting games full of football and emotion.

Alcorcón will arrive at the Anduva aiming to repeat their success of previous years and snatch some points against Mirandés, who have claimed four points of their own over the opening matchdays of the championship.

Manager Carlos Terrazas has all his players available with the exception of Jon Vega and goalkeeper Razak Brimah. The injured Mikel Iribas and Sergio Mora will be unavailable for José Bordalás’s Alcorcón.

Valladolid and Racing face each other again in the Liga Adelante in a thrilling encounter full of football, memories and new signings.

The Valladolid manager Joan Francesc Ferrer, Rubi, will be without internationals Dani Hernández and Zakarya Bergdich, and has left David Timor and Samuel Llorca out of the matchday squad. Javi Varas and striker Alejandro Alfaro could make their debuts. The Santander side will be without midfielder Iván Moreno, Bernardo Cruz and goalscorer Mamadou Koné.

On an international weekend, Zaragoza will try to take advantage of the absences in the Barcelona reserves team to claim some points against a side they have never beaten and who they lost to twice last season.

But they will not have it easy, with the Azulgranas still unbeaten in the opening stages of the championship, with one draw and a victory, and hoping to continue their run. The Aragonese dressing room will look for inspiration from their new signings to achieve a good result. William José ahd Vullnet Basha are the new names in the squad after the transfer market closed and they could make their debuts with their new club at the Mini Estadi.

Making their home ground a fortress is the main objective of the Canary Islands team this season and, on Sunday, they have the chance to take another step towards their goal against Lugo, one of the most spirited teams in the Liga Adelante.

Emotions will be running high and the teams' stars are aware of it. Canary Islands player Hernán Santana gave his assessment of his side's opponents: "We will have to do things well because our opponents are difficult and they’re patient on the ball". The Galician club's winger, David de Coz, said before the clash: "Las Palmas have put together a squad to aim for promotion".

It will be a match between equals at the Butarque, where both the Madrid side and the Bermellones, with just a single point in the bag, will look for their first victory of the season.

"We expect a fight, a lot of commitment. We will have to be very careful at the set piece because they have a very wide repertoire and work well", warned the Mallorca manager Valeri Karpin. His counterpart at Leganés, Asier Garitano, also praised his opponents: "We will have to be on the ball; Mallorca are a team on the rise".