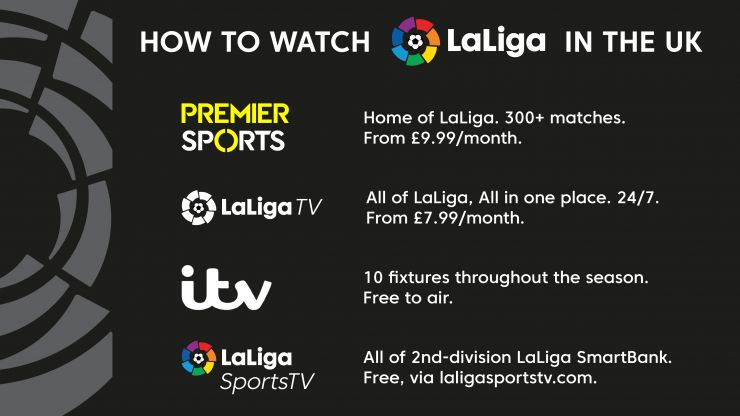 This season, fans can enjoy MORE OF LALIGA than ever before

Premier Sports, home to LaLiga in the UK and Ireland, confirm that fans can enjoy MORE OF LALIGA than ever before this season, including Europe's reigning champions and the world's top stars at elite Spanish clubs, all in a cutting-edge broadcast product.

In a first for a major European football competition, Premier Sports and its partners are offering unrivalled access to Spain’s top-flight LaLiga Santander and second-tier LaLiga SmartBank across a wide variety of linear, streaming and free-to-air platforms.

Starting this weekend, Premier Sports will offer access to over 300 live LaLiga Santander matches per season, including CA Osasuna vs. Sevilla FC, FC Barcelona vs. Rayo Vallecano, and UD Almería vs. current champions Real Madrid, via its Premier Sports 1 and Premier Sports 2 linear channels (from just £9.99 per month) available via Sky and Virgin TV, as well as the Premier Player and Amazon Prime Video Channels.

For diehard Spanish fútbol fans, LaLigaTV, the 24/7 channel showcasing All of LaLiga, All in one place, is available via streaming for all Premier Sports paid subscribers in the UK, and can also be accessed in standalone format via Premier Player and Amazon Prime Video Channels, for just £7.99 per month.

But that’s not all. This season, Premier Sports and LaLiga are offering unprecedented access to Spanish football via new free-to-air distribution:

In a three-year sublicensing arrangement, ITV will showcase one top LaLiga fixture per month, starting with the Matchday 2 fixture between Real Sociedad and FC Barcelona on Sunday 21st August at 8:00pm BST. Further details of ITV’s LaLiga coverage will be revealed by the broadcaster in due course.

Meanwhile, fans of Spain’s second division can enjoy all 11 LaLiga SmartBank matches per round via LaLiga’s own OTT streaming service, LaLigaSportsTV, FREE for all registered users and available on Android and iOS devices, as well as Samsung, LG and Android SmartTVs.

Where to watch LaLiga this season in the UK

“In June we proudly announced the renewal of our LaLiga rights until 2025. After months of consultation, we’re proud to reveal that football fans in the UK will have more access to LaLiga this season, thanks to Premier Sports’ distribution agreements with an unparalleled number of platforms. We look forward to the exciting Spanish football season ahead,” said Richard Sweeney, CEO of Premier Sports.

“Fans in the UK have a strong emotional connection to Spain and Spanish football in particular. This season, through our relationship with Premier Sports, we’re happy to offer more of LaLiga than ever before, including consistent free-to-air coverage, access to world-class LaLigaTV content and full coverage of both divisions, LaLiga Santander and LaLiga SmartBank,” said Melcior Soler, Audiovisual Director at LaLiga.