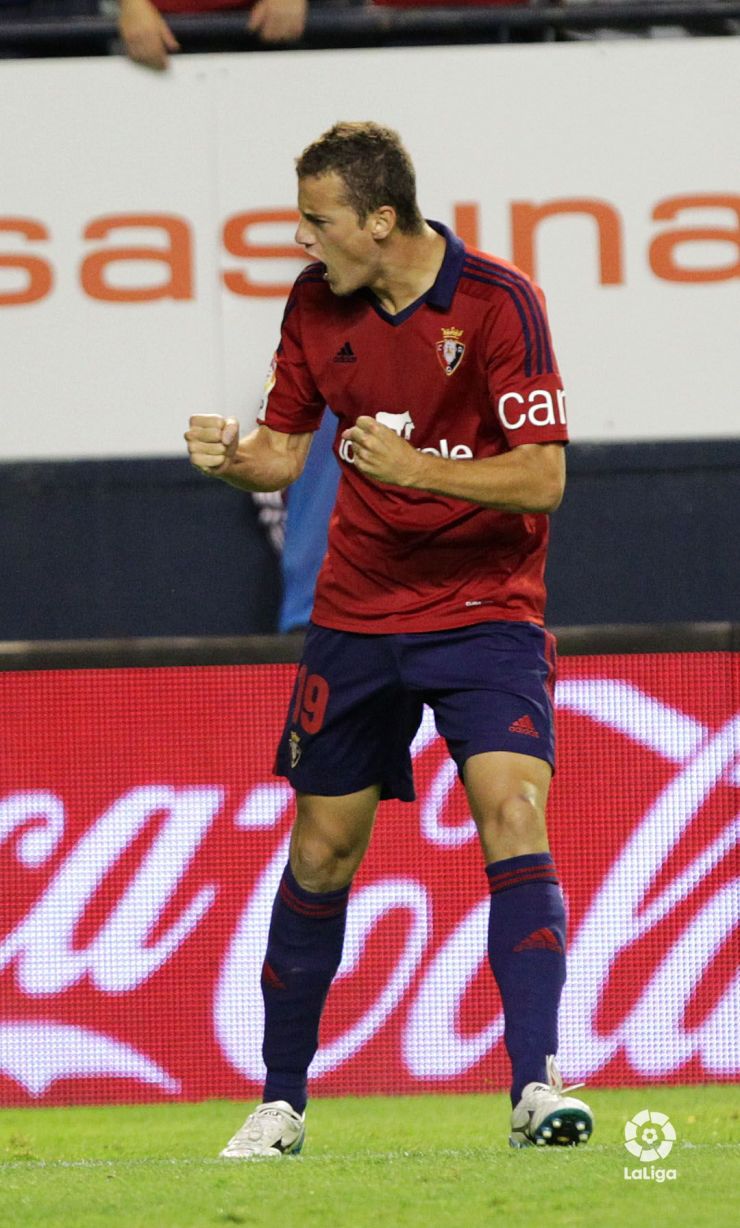 "This has been a great year for me"

Osasuna's newest revelation, Oriol Riera, speaks with LFP.es about his Liga BBVA debut and returning to the Camp Nou tens years on.

Osasuna face one of their toughest challenges of season this Sunday. With just three points keeping them out of the relegation zone, the Pamplona side travels to Barcelona to take on Tata Martino's men who are also in need of points if they want to remain in the Liga BBVA title race. This will be a special match for Oriol Riera who is returning to what was his home ten years ago. At 27 years of age the Catalan player has accomplished one of his biggest dreams: to play in the Liga BBVA.

LFP.es: Congratulations on making your Liga BBVA debut, you have had an incredible campaign so far. Did you expect things to go like this at the beginning of the season?

Oriol Riera: For me playing elite football in the best league in the world has been a dream come true, and I never would have thought I could perform so well and score so many goals. I'm loving the Liga BBVA and this has been a fantastic year for me.

LFP.es: How has it been moving to Pamplona and adapting to the change of Liga Adelante football to the Liga BBVA?

Oriol Riera: I was lucky to have chosen so well, this is a place that perfectly suits the way I am, the way I play and how I do things. Since arriving I have adapted well with my teammates, with the city, with the fans, and on top of that my mind is at ease with the amount of minutes I’m getting. So things are going really well.

LFP.es: You are the team's top scorer with nine goals, and on top of that you've scored important goals that have earned the team valuable points. What are your personal objectives?

Oriol Riera: My main objective, and that of the team, is to ensure that Osasuna stays up. It is very important that we remain in the elite division for another year. My ambition matches my eagerness to improve, to continue winning and to be able to experience more of these matches, which I waited so long to play in. How ever many goals I score will be welcomed.

LFP.es: Some people are comparing you to Jan Urban, the Polish striker who was one of Osasuna's deadliest strikers with 13 goals. Do you see yourself breaking that record?

Oriol Riera: The only way I can play is by giving it my all, looking to score goals and to do well in order to help my team. However hard I push will benefit the team, and if that helps us finish higher up the table, all the better.

LFP.es: You are one of the first names on Javi Gracia's team sheet. What is he like as a coach?

Oriol Riera: It is amazing being able to work with him. He explains things to us tactically, he's very calm and is full of knowledge about the game. He explains what he wants of you very clearly, he's a hard worker. From the moment he starts the day until the moment he goes to bed he's thinking about the next game and that attention to detail is what has helped us win matches.

LFP.es: Osasuna takes on Barcelona this weekend. How will you approach this match?

Oriol Riera: You have to enjoy playing against the big teams because there is nothing to lose. We won't make things easy for them and they'll have to sweat in order to beat us. We know they are not a direct rival and that we cannot challenge them man-for-man but we will make things as difficult as possible for them.

LFP.es: Draws against both Barcelona and Real Madrid in the first half of the season and a 3-0 win against Atlético Madrid, would you say the team is extra motivated for these types of games?

Oriol Riera: We had the good fortune of being able to play those matches at home. In our own ground we can go toe-to-toe with anyone. Playing away is different. Those teams are used to playing in their own stadiums and are a lot more aggressive in attack. On top of that, we don't get that extra push from our fans who regularly lift us during games. This game in the Camp Nou is going to be a lot tougher.

LFP.es: You will be playing against some of your old teammates from your Barcelona youth academy days such as Gerard Piqué, Cesc Fàbregas and even Leo Messi. What do you remember about those years?

Oriol Riera: That was a long time ago. Ten years have past since I last had the pleasure to being with those players. I was lucky enough to share the same dressing room as Messi for two years. I have some fond memories and can say that I was there with those great players and was able to enjoy my football with them.

LFP.es: With salvation in mind, how will you approach the rest of the season?

Oriol Riera: With a lot of hard work and dedication. We will believe in ourselves, play with loads of intensity, and will enjoy the games against our direct rivals, who we are capable of beating. We know there is some margin for error, however, things are very tight at the bottom because there are a lot of teams in the fight to stay up.