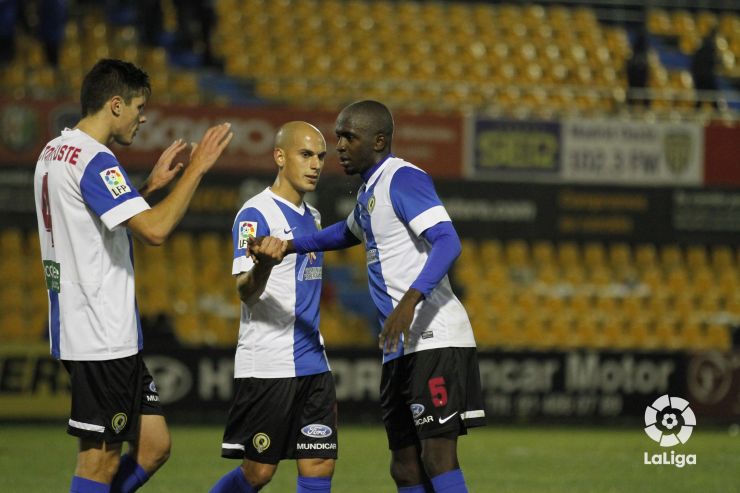 Things get tight around the relegation zone

The five sides at the bottom of the league picked up points on a weekend with few wins for the top of the table teams.

With just one matchday to go until the end of 2013 in the Liga Adelante, things couldn’t be tighter. While ten teams are fighting it out for a promotion spot in the upper half of the table, the bottom half is equally as close after matchday 18 of the season.

One of the teams to benefit most in the upper end of the league this weekend was Real Sporting de Gijón who beat CD Mirandés 3-2 to climb to third place. Real Murcia CF, having gone eight games without a win, ended the day all smiles in the Estadio Nueva Condomina after coming from behind to beat FC Barcelona B with three goals being scored in the last six minutes.

A tight win for Córdoba CF against CD Tenerife, which put an end to the Canary Islanders’ run of eight games without losing, and a 2-1 victory for Real Jaén CF over RCD Mallorca, which sees them climb out of the relegation zone, made some of the rest of the Liga Adelante matchday 18 action.

All bottom five sides picking up points on their missions to put distance between themselves and the drop zone. A 1-1 draw between Girona FC and RC Recreativo de Huelva, home wins for CE Sabadell over Real Zaragoza (1-0) and Deportivo Alavés over CD Lugo (2-1), and 2-0 away wins for Hércules against AD Alcorcón and Real Madrid Castilla against UD Las Palmas means there are only five points separating the bottom seven teams.

The Mendizorroza played host to one of the most intense encounters of the weekend. Alavés scored the winner in the last minute of the match courtesy of a Óscar Serrano free kick in added time. Sabadell also got a precious win over Zaragoza, putting an end to a run of three successive victories for the Aragon side.

Real Madrid Castilla meanwhile kept its hot streak going against UD Las Palmas. Since taking over, Manolo Díaz has turned fortunes around for the Madrid outfit which has now gone four games without knowing defeat (three wins and a draw). Another team that added to the hype surrounding it this season was SD Eibar whose win over RC Deportivo de La Coruña in the Ipurua Stadium saw it climb to fourth in the table.

Another side to do well in the upper half of the league this weekend was Real Sporting de Gijón, thanks to win over CD Mirandés (3-2), which sees the Asturian move into third spot. Real Murcia CF put an end to a streak of eight games without a win by coming back from behind against FC Barcelona B with three goals coming in the last six minutes.

A tight win for del Córdoba CF over CD Tenerife, which put an end to a run of eight games without losing, and a 2-1 for Real Jaén CF win over RCD Mallorca rounded up the rest of the action for matchday 18 of the Liga Adelante.