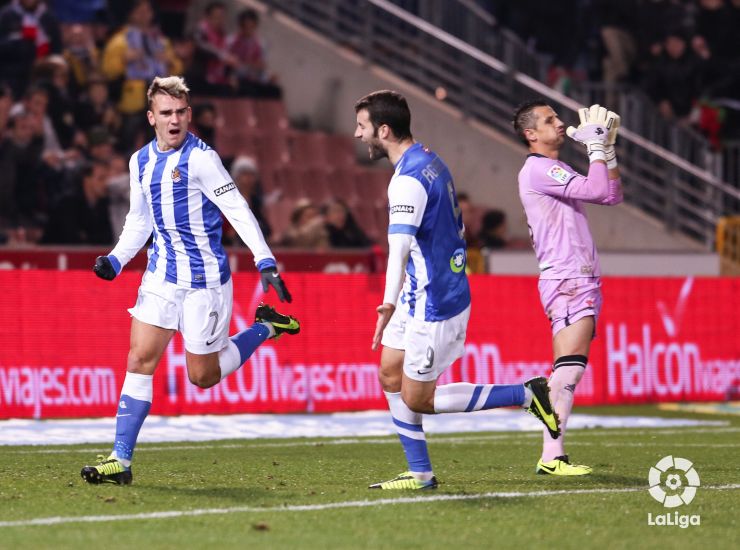 By finding the net in the Basque derby, the French striker made it twelve goals in his last twelve Liga BBVA matches.

The txuri-urdin have found a new goal machine. A glance at Antoine Griezmann's stats is proof enough that the Frenchman has become the spearhead of Real Sociedad de Fútbol's attack. Twelve goals in the last twelve matches, the last against Athletic Club in the Basque derby, make him the third most prolific striker in the Liga BBVA, as well as one of the most important players in Jagoba Arrasate's team.

With his last goal, against his team's nemesis, he not only opened the scoring for the sixth time this season, but he also became the third Real player to score in the three consecutive league derbies after Jesús María Satrústegui and José Mari Bakero.

His first goal this season took a while to come and he did not break his duck until the seventh matchday against Sevilla FC, earning Real a draw (1-1). Since then he has scored in every match bar two; against Rayo Vallecano, where the blanquiazules lost 1-0 and in the 4-3 victory over RC Celta de Vigo where Carlos Vela stole the limelight by scoring all four goals for Real.

His goal against Athletic is his twelfth this season and his fourth in four games. But this does not match his best goal-scoring streak, which came between the Valencia CF match on matchday nine and that against Celta in game fourteen, when found the net in five matches on the trot.

His figures have helped Real Sociedad, after five matches without a loss, to fifth place in the Liga BBVA table. Despite the disappointment of the UEFA Champions League elimination, the team from Donostia has not lost an ounce of style and continues to be one of the best in the Liga BBVA.