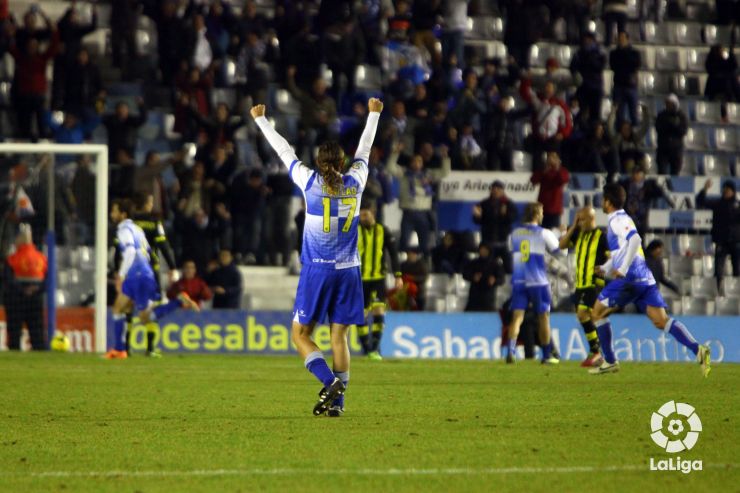 The two sides of Sabadell

By beating Zaragoza over the weekend, the Catalan side once again proved its steeliness at home.

Sabadell FC’s victory over Real Zaragoza last weekend confirmed the two-sided nature of the team’s Liga Adelante season. The Nova Creu Alta Municipal Stadium has acted as a fortress for the Catalan side, but away from home things have been distinctly different. That has been the story so far for Sabadell during the 2013/14 campaign.

With the Liga Adelante as competitive as ever this season (only five points separate the play-off positions and the relegation places), Sabadell currently finds itself in the bottom half of the table, but away from the Liga Adelante drop zone thanks to fantastic home form. The Arquelinados have the third best home record in the whole division, racking up 19 points from the 27 available so far. The Nova Creu Alta has borne witness to six wins, one draw and two defeats in nine matches this season.

The team’s last victory came last Saturday against a Zaragoza side that came into the match in clear promotion form, having won its last three encounters. However, the away side had to leave Barcelona empty-handed. Sabadell’s top goal scorer this season, Manuel Gato, missed a penalty in the first half but made amends in the 59th minute to ensure the Nova Creu Alta’s status as a difficult place to pick up points remained intact.

The Catalans are not so tough to beat on the road though. Poor away performances have made Sabadell the worst travelling side in the Liga Adelante, with the team only mustering up two draws and seven defeats from its nine matches as visitor during the campaign. These disappointing results have led to a place in the bottom half of the table for the team, although on the same amount of points as Girona FC and out of the danger zone. "For all the matches we don’t win away, we have to win here", the team’s defender Carlos Hernández declared ahead of the next few matches. Last Saturday against Zaragoza at least, they achieved their objective.