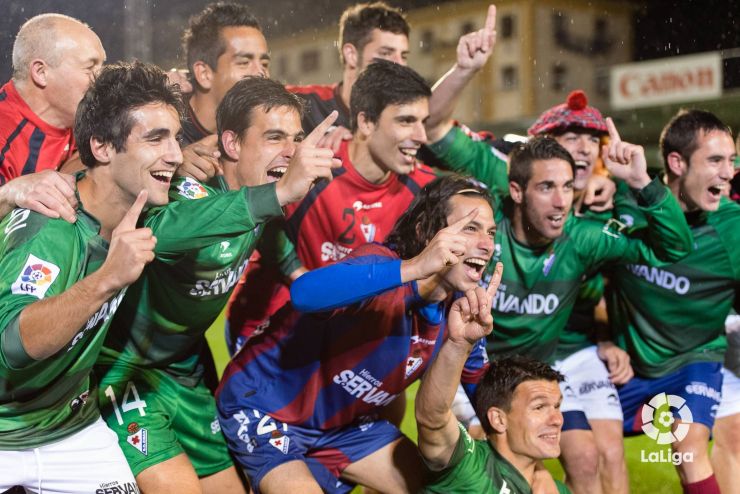 The tense battle for promotion

In a thrilling climax to the Liga Adelante, Eibar already have their place in the top-flight, Deportivo are on the verge of promotion, and nine other teams are in the fight for the playoff spots.

With two matchdays left to play in the Liga Adelante, the fight for the playoffs is hotting up. While the city of Eibar experienced a night of magic and history yesterday, RC Deportivo de La Coruña is a small step away from automatic promotion to the Liga BBVA.

SD Eibar achieved the greatest feat in the club’s history on Sunday. With 67 points and current championship leaders, the team from Gipuzkoa sealed its pass to the top-flight, beating Deportivo Alavés in the Basque derby (1-0) when UD Las Palmas failed to do likewise to RC Recreativo de Huelva (2-3). The achievement was a masterclass of humility and sacrifice in Spanish football and, above all, it will never be forgotten by the more than 27,000 residents of the city of Eibar.

It looks like it will only be a matter of time until Deportivo also seals its automatic promotion, as it only needs one point from a possible six to return to the Liga BBVA after a one-year absence. The Galician outfit’s stumble against CD Numancia (2-1) has delayed their coveted objective, although the defeat of third-place UD Las Palmas has done nothing to hurt their chances. It is the Canary Island team, together with Real Sporting de Gijón on 60 points, who top the playoff positions, so keeping their dream of first-division football alive is in their own hands.

Hot on their heels, just one point behind, are Real Murcia CF, Córdoba CF and RC Recreativo de Huelva. The two Andalusian sides faired best at the weekend after their respective victories that capitalised on the draw between the side from Murcia and Real Zaragoza (1-1). Now, the Blanquiverdes and the Onubenses are to meet on Saturday in one of the weekend’s most enticing clashes.

In addition, CE Sabadell FC’s victory over CD Tenerife keeps the Catalans’ hopes alive after they scaled to ninth place, while it means that Tenerife’s chances of returning to the elite of Spanish football are dwindling. AD Alcorcón and Numancia, with 56 and 53 points respectively are also now unlikely candidates, although they still have a mathematical chance of winning Liga Adelante’s top prize.

In summary, there are two Liga BBVA spots up for grabs, six points available and eleven teams in the fight, it promises to be a thrilling finale, and it starts on Saturday at 1900 with a simultaneous kick-off in a passion-filled matchday that will not be for the faint of heart.