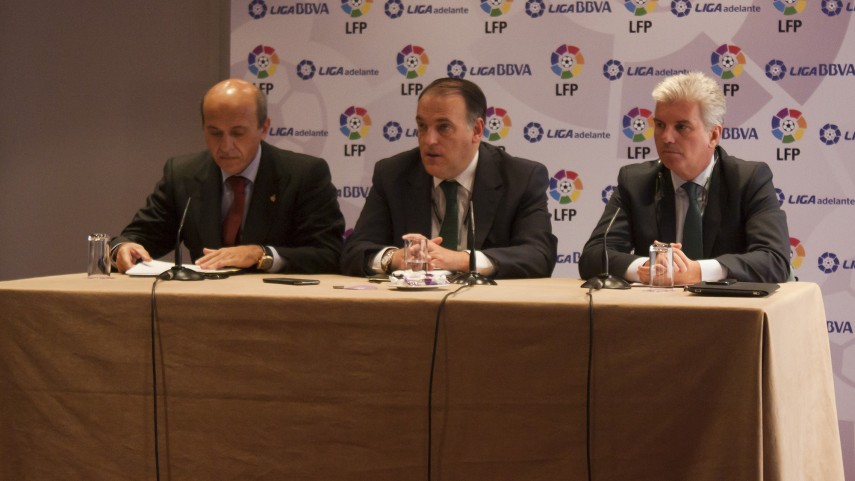 The Seville derby starts its engines at the LFP General Meeting

After the Extraordinary General Meeting, the presidents of Seville and Betis appeared before the media together with Javier Tebas to analyse the upcoming derby.

Once the Extraordinary General Meeting was over in Seville, the president of the Liga de Fútbol Profesional, Javier Tebas, together with the presidents of Sevilla FC and Real Betis Balompié, José María del Nido and Miguel Guillén appeared before the press.

As was to be expected, a large part of the event was focused on the Seville derby between Sevilla and Real Betis.

José María del Nido stated "this is going to be a fiesta of Seville's football. Having two teams from the both city among the top flight, with both playing in Europe, is something worth celebrating".

When asked about the likelihood of any incidents surrounding the match, the president of Betis, Miguel Guillén, said that he hoped "to see a passionate battle on the field. That is where we should expend all our energy and make sure we do not have a drop left for anything else. Anyone causing disruption is not a true fan".

When the media asked Javier Tebas for his prediction for the clash, the president of the LFP only wanted to highlight "the importance of the sporting spectacle. An match that could be among the top 20 most important events in world sport. The passion for football in Seville cannot be compared with other parts of the world. The Liga BBVA is thankful and proud of their understanding and their request for a peaceful match".