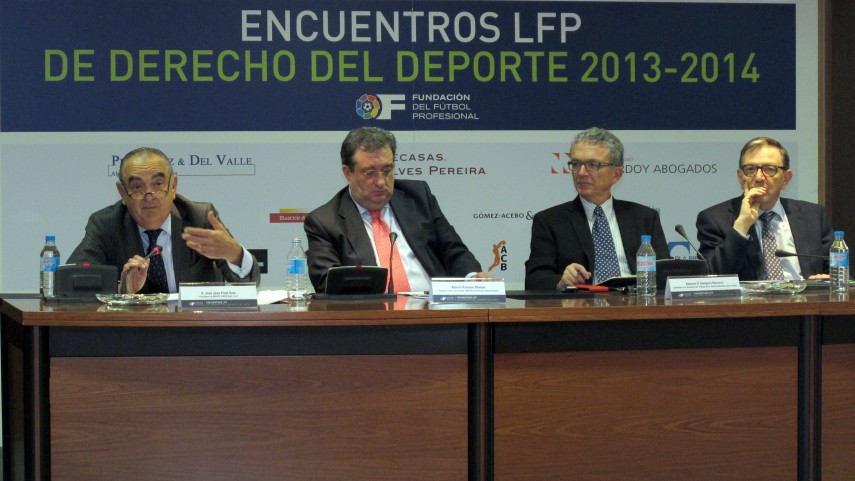 This Tuesday the Fundación de Fútbol Profesional (FFP) held the seventh LFP Meeting of Sports Law, in which renowned experts talked about legal issues, which currently affect sport. On this occasion, Pintó Ruiz & Del Valle was the legal firm asked to speak during the first part of the day.

Alberto Palomar, a senior professor of Administrative Law in the Universidad Carlos III de Madrid, opened up the discussion by talking about the current legal-sporting environment affecting Spanish sport and which has resulted in a massive improvement in terms of transparency recently.

In relation to the issues raised by Alberto Palomar, Professor of Labour Law at the Universidad Rey Juan Carlos, Antonio V. Sempere, as usual, presented the most relevant case law handed down by the courts in recent weeks in the field of sports law at national and international level.

Thirdly it was the turn of the invited law firm Pintó Ruiz & Del Valle, who were represented by José Juan Pintó Sala, the president of Bufete Pintó Ruiz S.L.P. The lawyer who was present during the FFP’s seventh meeting, gave a speech about "Transfer of children". To conclude, Ángel Blasco Pellicer, professor of Labour and Social Security at the University of Valencia spoke about "Collective bargaining in sport after the labour reform."