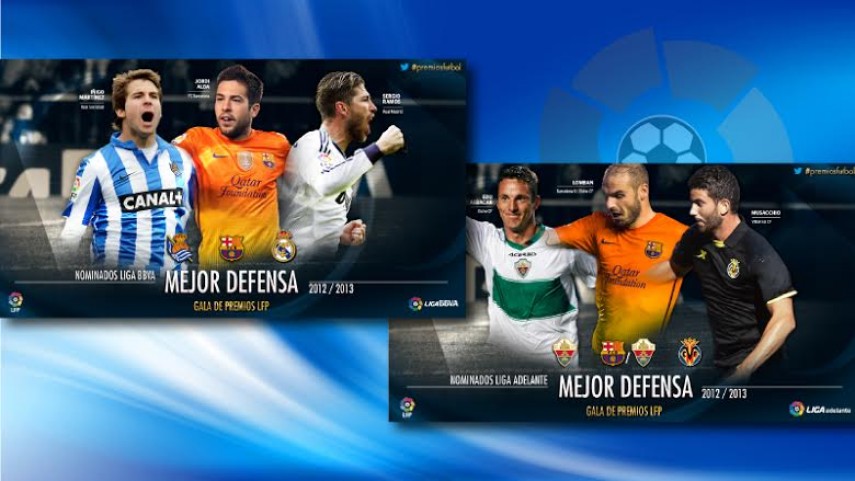 The season's best defenders at the LFP Awards

Iñigo Martínez, Jordi Alba and Sergio Ramos in the Liga BBVA, and Edu Albácar, David Lombán and Musacchio in the Liga Adelante look to snap up the prize.

Central-defenders Iñigo Martínez and Sergio Ramos, and left-back Jordi Alba are the three Liga BBVA nominees. Players who, despite their youth, have become indispensable members of their respective teams and all more than deserve to see their name on the trophy.

Iñigo Martínez became the pillar of Real Sociedad de Fútbol in the final stretch of the season and he was one of the reasons for the team from Donostia's great finish to the year. For his part, Sergio Ramos re-established himself as the man in charge of Real Madrid CF's rear-guard, and Jordi Alba proved his great worth with FC Barcelona.

Those nominated for the prize in the Liga Adelante are Edu Albácar, David Lombán and Mateo Pablo Musacchio, all of them responsible for holding the fort at their teams and participating in their promotions to the Liga BBVA.

Edu Albácar is one of the competition's veterans, but it has been with Elche CF where he has really found his feet. David Lombán, who also plays for Elche, put in a great performance against FC Barcelona B last season, helping them to reach the Liga BBVA. The young Musacchio has been something of a revelation at Villarreal CF for his performances at the back.