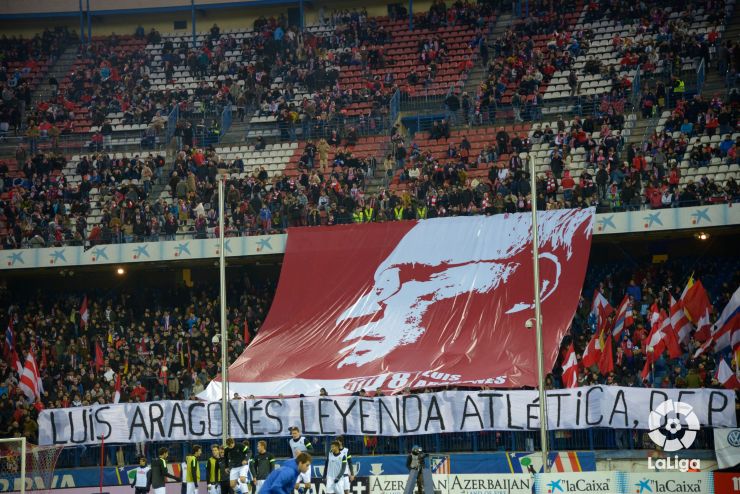 The rojiblancos go top on a special day

Atlético de Madrid is back at the peak of the Liga BBVA table, 18 years after it last enjoyed the privilege, having beaten Real Sociedad de Fútbol. It came after an emotional match in which the Calderón remembered Luis Aragonés.

"I found it an emotional match, the people, the silence for eight minutes. I'm sure Luis is up there dressed in red and white and happy about the courage shown", said Club Atlético de Madrid's manager, Diego Pablo Simeone, after his team's 4-0 win over Real Sociedad de Fútbol on Liga BBVA matchday 22.

After ex-Atlético player and coach, Luis Aragonés, passed away on Saturday, the Vicente Calderón prepared itself for a heartfelt remembrance of its legend. After an emotional homage to the 'Sage of Hortaleza' before the game from the club's veteran players and the fans, it was the turn of Simeone's men.

After Saturday's defeat of FC Barcelona at the hands of Valencia CF, Atlético came into the clash against Real Sociedad knowing that three points would mean ending matchday 22 of the Liga BBVA at the top of the table, 18 years after it last graced the spot. And the colchoneros took to the challenge with one of Luis Aragonés' many famous phrases in mind. "Win, win and win…".

And that is just what Atlético did, with goals from David Villa, who dedicated his to the ex-Spain manager, Diego Costa, João Miranda and Diego Ribas. The emotional win means that the rojiblancos now lead the Liga BBVA on their own and they can dream of lifting the trophy once more. The last time Atlético was looking down on the rest, in the 1995/96 season, it won the last of the nine Liga BBVA titles that adorn its trophy room.

Diego Simeone, who won the title as a player for the side from the capital, is now at the helm of a very solid leader after 22 matches, with 57 points from a possible 66. There are still 16 matches to play, but Atlético and its energetic, faithful and war-hardened fans, cannot be blamed for dreaming. "By understanding that force is the product of a group, we can compete", said Simeone, whose team will be assisted by the helping hand of Luis Aragonés from above.