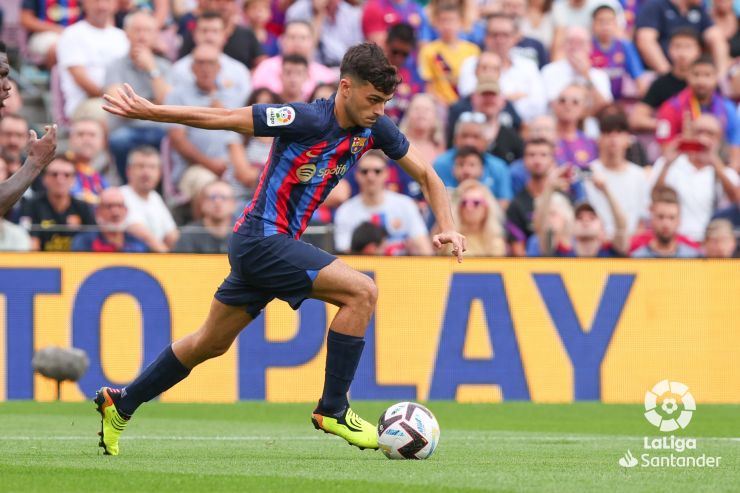 The rising stars of El Clásico

The squads of Real Madrid and FC Barcelona are packed with up-and-coming talents, including Eduardo Camavinga, Aurélien Tchouaméni, Gavi, Pedri and Alejandro Balde.

Real Madrid vs FC Barcelona is the most famous game in football due to decades of fierce rivalry and a rich history of the best players in the world coming face to face with each other. This Sunday’s fixture will be particularly fascinating due to the sheer number of young stars of the future, who will be looking to write their own chapter in the fixture’s history as well as help their team move clear at the top of LaLiga Santander.

Both sides have young talent oozing through their midfields. FC Barcelona’s Pedri won the 2021 Golden Boy award for the best player in the world under 21 years old, while Real Madrid's Eduardo Camavinga is the favourite to win the prestigious accolade this year.

Despite still being only 19, Pedri is well used to the pressure cooker atmosphere of ElClasico and is due to play in the fixture for the fifth time in LaLiga Santander, in addition to one match in the Spanish Super Cup. However, he has not had the best fortune against Real Madrid, a club where he had trials as a child but failed to impress the scouts of Los Merengues. The Canary Islander lost his first three LaLiga Santander games against Real Madrid but played a starring role in their crushing 4-0 win at the Bernabéu last March, a turning point for Xavi Hernández’s side and a game that laid the foundations for their excellent start to this season.

But, Pedri is not Barça’s only teenage midfield magician. Gavi has made remarkable progress since making his first-team debut last year less than a month after his 17th birthday, soon after becoming Spain's youngest ever debutant. He is now one of the first names on the team sheet for his club and country and this fixture is another opportunity to showcase his talent on the biggest stage.

Real Madrid’s Camavinga, meanwhile, has played only once in ElClasico, coming off the bench in the 0-4 defeat to Barca. Should he make it into Carlo Ancelotti’s starting line-up or come on as a substitute again, the ever-improving 19-year-old will be extra determined to make his mark on the game.

One player who is assured of his place in the line-up is Aurélien Tchouaméni, who has seamlessly slotted into Real Madrid’s midfield since his move from Monaco in the summer, starting all but one of his side’s matches in LaLiga Santander and the Champions League. The Frenchman is the epitome of the modern midfielder, as adept at defensive duties as he is at starting and finishing attacks. He will be keen to make an impact in his first appearance in ElClasico.

Alongside him in midfield will be Fede Valverde, a player who has been in the Real Madrid team for some time but has recently hit a whole new level of performance. His only goal of last season came against FC Barcelona and he looks even more dangerous in front of goal this campaign. The Uruguayan has already scored four goals and contributed two assists, also winning the LaLiga Santander September Player of the Month award.

Both these teams also have plenty of young talent in attack. The 22-year-old Vini Jr. has made a ferocious start to the season with five LaLiga Santander goals already to his name and he knows what it is like to score in ElClasico, having scored the crucial opening goal in a 2-0 win for Los Merengues in March 2020, which had a big say in Real Madrid going on to win that year’s title over FC Barcelona.

His Brazilian strike partner Rodrygo may not be guaranteed a starting berth due to Karim Benzema’s return from injury, but the 21-year-old has often proved to be the man for the big occasion, whether starting or from the bench.

Looking at the Catalan club, FC Barcelona’s top scorer this season may be the 34-year-old Robert Lewandowski but Ansu Fati, the club’s youngest ever scorer, will be itching to get on the pitch and could prove a highly valuable asset as a substitute, having made important contributions after coming off the bench this season. His ceiling is so high and Real Madrid will have to be wary.

Then there is the latest young sensation to break through from Barça's academy, La Masia: Alejandro Balde. The 18-year-old left-back has made a real impression on Xavi, fighting off competition from Jordi Alba and new recruit Marcos Alonso to stay in the team. The teenager, like all the other young stars mentioned above, will hope to show the world what he can do when the ball gets rolling on Sunday.