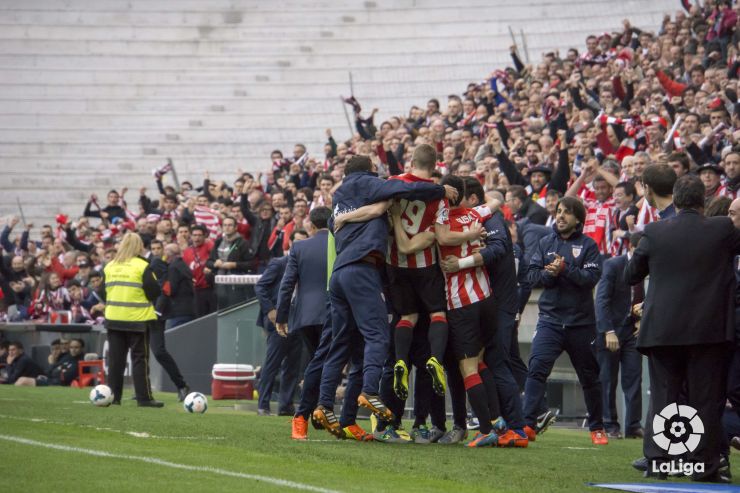 Ernesto Valverde’s team has stamped its passport to Europe thanks to a highly consistent Liga BBVA season.

Athletic Club will be in Europe next year. The rojiblancos sealed their passage to the UEFA Champions League last Friday after their brilliant 3-0 win away to Rayo Vallecano. The victory guaranteed a fourth-place finish for Ernesto Valverde’s men, who have held the position nearly all season.

Their battle for a place in Europe next year has had a happy ending. Athletic have been remarkably consistent all season to stay at the top end of the table since matchday 3 of the Liga BBVA. It was on the 15th, after beating FC Barcelona in the San Mamés (1-0), when they set up shop in fourth place, where they have remained ever since.

One of the Bilbao side's keys to success this season has been their solidity at San Mamés. The new stadium has been a fortress for the Red and Whites, with only two sides, RCD Espanyol (1-2) and Club Atlético de Madrid (1-2) taking the three points, whilst three; Valencia CF (1-1), Elche CF (2-2) and Real Madrid (1-1) have managed to secure a draw. San Mamés has given Athletic solidity, and the side have used the home crowd to their advantage in becoming one of Liga BBVA's most consistent sides.

Another of the Basque side's secrets has been the development a squad in which all players have played a key role in securing their European objective. The sharing of goals between players is better than any other sides. Ibai Gómez's eight goals from the bench (he has only started six games) have seen him become the side's super-sub.

The author of Athletic's success is without doubt Ernesto Valverde. In his return to what was his home as a player for six seasons, and as coach between 2003 and 2005, 'Txingurri' has managed to pass his winning mentality onto the players that have secured the side's fourth place. Athletic have acquired a collective identity and consistency that has helped them secure a return to Europe.