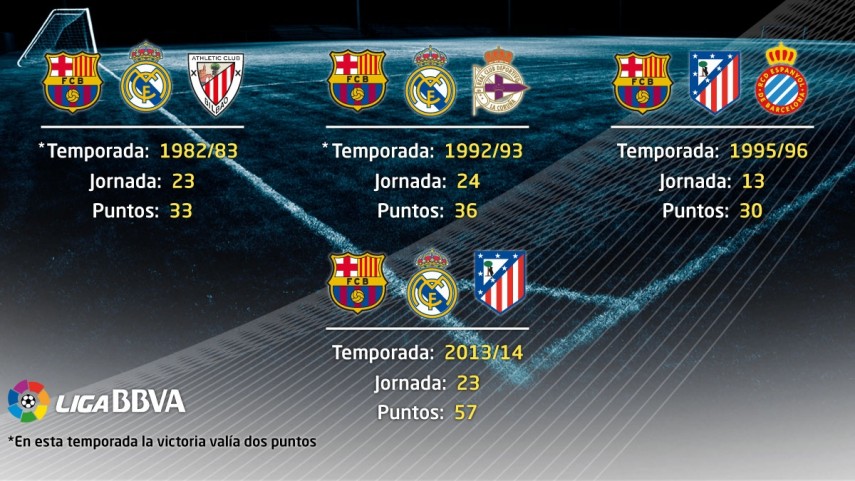 The most even Liga BBVA in history

Of all the big leagues in Europe, Liga BBVA is the only one that has three sides level on points at the top of the table.

Liga BBVA is reaching its final stretch and three sides are level on points, separated only by goal difference, at the top of the table. FC Barcelona, Real Madrid CF and Club Atlético de Madrid all have 57 points from the first 23 games, a situation that hasn’t been seen in the league since the 1992/93 season, over 20 years ago.

The first precedent of a similar situation came in the 82/83 season, when the three sides in the Liga de Fútbol Profesional who have never gone down to Liga Adelante: Barcelona, Real Madrid and Athletic Club were level on points (33) after 23 games. At the end of the year it was the Basque side that were crowned champions in a season when victories were worth two points.

This wasn’t the only time that Liga BBVA found itself with three teams fighting it out for the title at such an advanced stage. Exactly 10 years after this, there was a very similar situation. In the 1992/93 season, the Catalans, the side from the capital and RC Deportivo de La Coruña were protagonists of a hard fought league battle, and after 24 games they all had 36 points.

95/96, the first season in which victories were worth three points, was the last time that three sides were level on points at the top of the table, albeit not at such an advanced stage of the season. Barcelona were once again present, however this time they were joined by Atlético and RCD Espanyol. In round 13 of games they all had 30 points.

This 13/14 Liga BBVA season is making its mark on both Spanish and European football. The competition is the only one that has three sides level on points at the top of the league, battling it out for the title. In the English Premier League Chelsea FC are leaders, a point above Arsenal. In Italy Juventus have a nine point cushion over AS Roma, whilst in Germany, Pep Guardiola’s FC Bayern sit 13 points about their nearest rival.

Without doubt, excitement is the main protagonist in a season where Diego Pablo Simeone’s Atlético side have kept pace with the reigning champions and their city neighbours, something that until now the Liga BBVA had never seen.