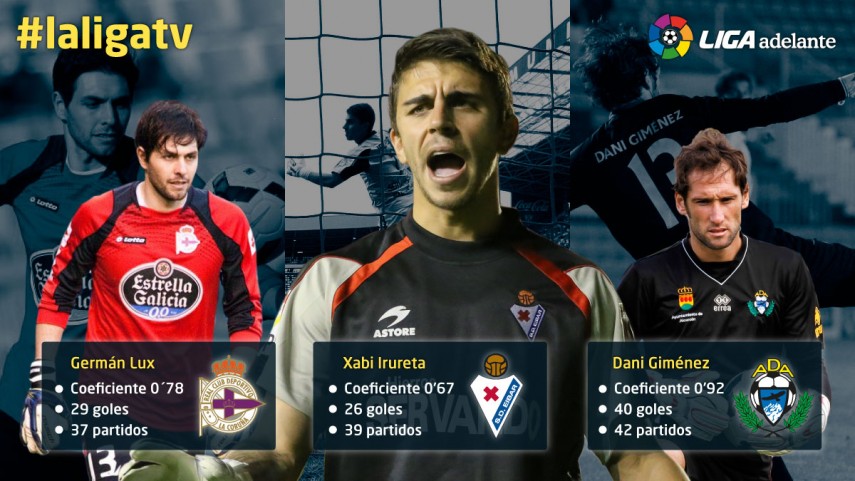 The meanest keepers in the 2013/14 Liga Adelante

Xabi Irureta, Germán Lux and Dani Giménez were three of the standout men between the sticks for their teams in a passionate season.

The 2013/14 Liga Adelante proved to be one of the tightest editions of the competition in recent memory. SD Eibar, the Liga Adelante champions, were one of the season’s surprise packages. But if anyone has stood head and shoulders above the rest in the nine months of competition it is the shot-stoppers, whose saves have helped their respective teams achieve their goals.

Quick reflexes, passion and determination are just some of the qualities shown by Xabi Irureta (Eibar), Germán Lux (Deportivo) and Dani Giménez (AD Alcorcón); the three keepers who conceded the fewest goals in the 2013/14 season.

Xabi Irureta: the champions’ guardian
While Eibar’s season in the Liga Adelante was nothing short of excellent, a large part of their achievement was thanks to the Berriatua-born goalkeeper. Irureta manned the goal for Gaizka Garitano’s team for 39 games and only conceded 26 goals, fewer than any other team in the competition. An average of 0.67 goals per match leaves no doubt about his importance to the Basque side, which will be playing in the Liga BBVA next season for the first time in its history together with the biggest teams in Spanish and European football.

Germán Lux: experience and quality at the service of Deportivo
The Argentinian keeper became the Galician club’s number 1 in the 2013/14 season after the departure of Dani Aranzubía early in the campaign. Some great performances between the sticks made the goal in the Estadio de Riazor his own for 37 matches, time during which he only let in 29, putting him in second place behind Irureta with an average of 0.78. With vast experience in Spanish football, he will now have to demonstrate his quality once more in the 2014/15 Liga BBVA after winning promotion with the side from Coruña.

Dani Giménez: a stalwart for Alcorcón
The Alfaferos managed to keep their place in the Liga Adelante after a shaky start to the season. However, the Galician stopper has always been one of the stars of José Bordalás’ team. An undisputed member of the starting line-up all season, only 40 goals got past him all year giving him an average of less than one per match. His performances were critical for a team that won 16 matches, drew 11 and kept 18 clean sheets.

There were many other stars in the Liga Adelante last season, and although they do not feature here, players such as CD Numancia’s Biel Ribas, Real Murcia CF’s Casto Espinosa and Córdoba CF’s Mikel Saizar also had spectacular years.