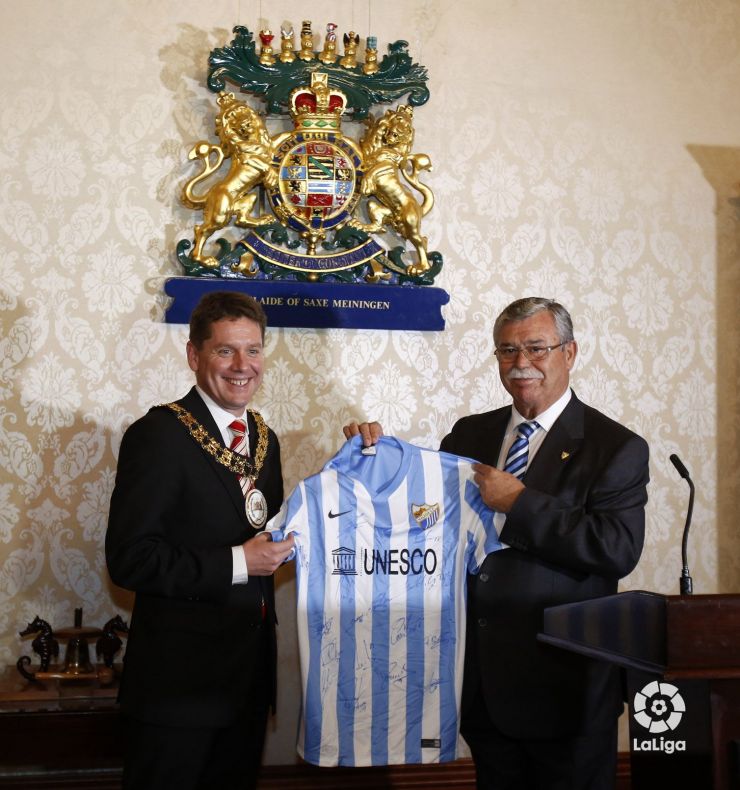 The mayor of Adelaide receives the Málaga travelling party

Stephen Yarwood, the governor South Australia’s capital, welcomed the Andalusian side at a warm act held in the city’s town hall.

Málaga CF, one of the five Spanish sides taking part in the LFP World Challenge tour, were given a warm welcome by Adelaide’s top officials. In an event celebrated at the South Australian capital, mayor Stephen Yarwood hosted the directors of the Andalusian side in an emotional act.

In a friendly atmosphere, with accompanying guitarist and selection of local wines and food, Yarwood made it clear how important Friday’s match between Málaga and Adelaide United FC was for the city. "We are very happy have to have a super club such as Málaga in Adelaide. We are very happy to be the first city in Australia to be invited to this event", said the mayor in his speech.

"The LFP World Challenge is a tour organised by the Liga and the Spanish government to promote not only football, but also Spanish culture and gastronomy. I would like to highlight the collaboration and brotherhood between Málaga and Adelaide", he said to those present.

Amongst the invited was the entire first team squad of Adelaide United, with their Spanish coach, Josep Gombau, with their president Greg Griffin also in attendance. Griffin also had kind words for Málaga and this LFP initiative. "To have a club of this prestige and quality in Adelaide to play a serious game of football is a privilege".

For Málaga’s part, Francisco Martín spoke. "We at Málaga are very happy with the welcome we have received in Adelaide. We are proud to represent the city of Malaga and Spain on this tour. We hope that this first visit of a Spanish club to Australia will only be the start, it would be great for all", said the director of the Andalusian side.

At 19:30 local time (12:00 in Spain) on Friday 25 July, Málaga and Adelaide United will face off at the impressive Oval Stadium in the capital of South Australia. After this tie, the Spanish side will travel to Perth to take on Perth Glory FC as their tour of Oceania draws to a close.