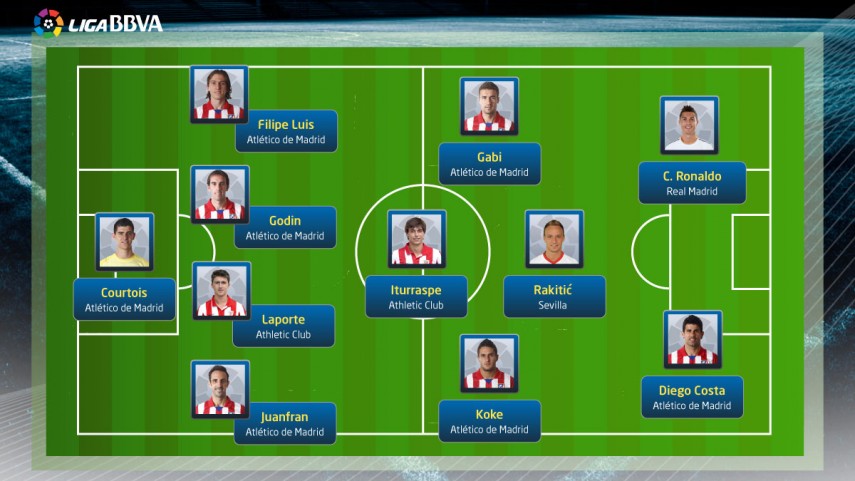 The Liga BBVA team of the season

The LFP.es team has selected the eleven best players in the championship.

Having enjoyed a passionate and competitive championship that will go down in history as one of the best in Spanish football, the team at LFP.es has selected the eleven best players from the 2013/14 Liga BBVA.

Between the sticks we have Club Atlético de Madrid's shot-stopper Thibaut Courtois who, with an average of 0.65 goals conceded per game, has been a truly difficult man to beat for the Rojiblancos. He only let in 24 goals and kept 22 clean sheets this season.

Our defence includes four men. Juanfran Torres and Filipe Luis are the full-backs while the Aymeric Laporte - Diego Godín command from the centre. In addition to the impeccable performances of the Atleti players, the name of Athletic Club's young defender stands out above the rest. Laporte has stunned everyone with his assurance as a centre-half and his versatility as a full-back and he is a player destined to be headhunted by Europe's biggest clubs.

The core of the team is formed by four midfielders who have played intelligent and elegant football throughout the season and have delivered success to their respective teams. The young Ander Iturraspe has been the engine of an Athletic team that will be playing UEFA Champions League football 16 years after their last appearance in the competition. He stands beside Jorge Resurrección 'Koke' and Atlético's captain, Gabi. These two players have breathed life back into the midfield of the championship winning team. The fourth man there is Ivan Rakitić, the heartbeat of a Sevilla who have returned to their throne after winning their third UEFA Europa League.

Up top are two of Liga BBVA's top goalscorers, who have played wonderful football and scored sensational goals throughout the nine months of the competition. Cristiano Ronaldo scored 31 goals in 30 games as he took the honour of being the top goalscorer in Spain. His partner in attack is Diego Costa. The Brazil-born Spain international scored 27 goals in what was his best ever season as a professional.

There wasn't room for everyone, and the Liga BBVA's bench is full of stars. It would be wrong of us not to mention players like Leo Messi, Alexis Sánchez, Luka Modrić, Pepe, Rafinha and Keylor Navas.