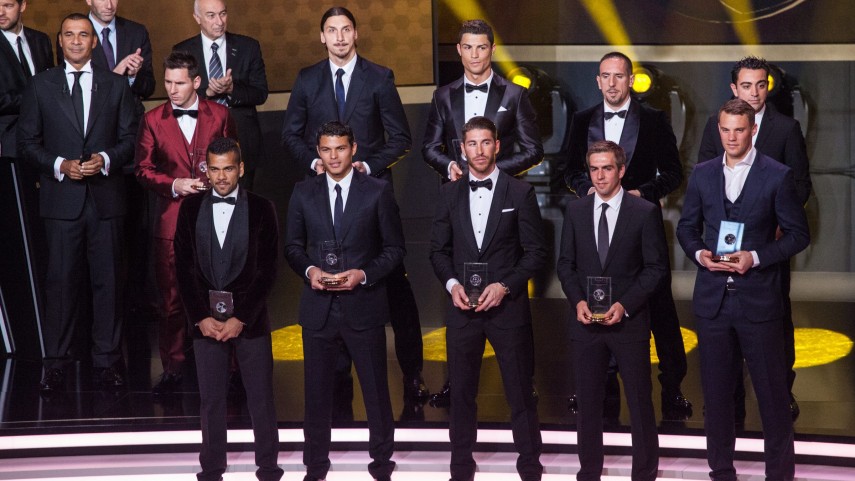 The Liga BBVA is well represented in the FIFA FIFPro XI

Barcelona’s Alves, Xavi, Iniesta and Messi and Real Madrid’s Ronaldo and Ramos represented the Liga BBVA in the best starting XI of the year.

There were two stars from the Liga BBVA that took centre stage at last night’s Ballon d'Or ceremony: Real Madrid’s Cristiano Ronaldo and Barcelona’s Lionel Messi. Ronaldo was awarded with the prestigious award while Messi came second in the voting, just behind the Portuguese. But this recognition would not have been possible without the support and hard work of their respective teammates.

Some of them played at their peak levels during 2013 which earned them a place in the FIFA FIFPro XI, a fictitious team made up of the best players in the world. Barcelona had the largest number of representatives in the team. Led by Lionel Messi, the Catalans also had Dani Alves, Xavi Hernández and Andrés Iniesta in the starting line up, all of whom were important components to the blaugrana’s season, which saw the club win its 22nd Liga BBVA title and a few months later the Spanish Super Cup.

One man who played a very important role in the Real Madrid defence was Sergio Ramos. The Andalusian helped his teammate Ronaldo (who also made it into the FIFA FIFPro XI) on his way to winning the Ballon d'Or. The team’s work paid off as 2013’s most determined player, Cristiano Ronaldo, was rewarded with the grand prize.

Over 50,000 votes from footballers around the world were counted to decide the best starting XI. Since the inception of this prize in 2005, Ronaldo and Messi have received the most amount of nominations: seven each (six while playing in the Spanish championship). Following just behind them with six is Hernández and following him are Iker Casillas and Andrés Iniesta with five each. This annual prize shows just how consistent the Liga BBVA players are year after year.

Nine years since its inception, when the Cameroon and Barcelona striker Samuel Eto'o was the only Liga BBVA representative in the XI, the Spanish championship was able to boast having six players in the team during the 2013 edition.

The tipping point came in 2012 when the entire FIFA FIFPro XI was made up of players from the Spanish topflight. Since being created the dream team has included 34 players from the Liga BBVA. As such Spain is way in front of Serie A and the Bundesliga, which have only been represented by three players each, while the Premier League and Ligue 1 have only been represented by two players each. The facts speak for themselves, the sky is the limit for the Liga BBVA.