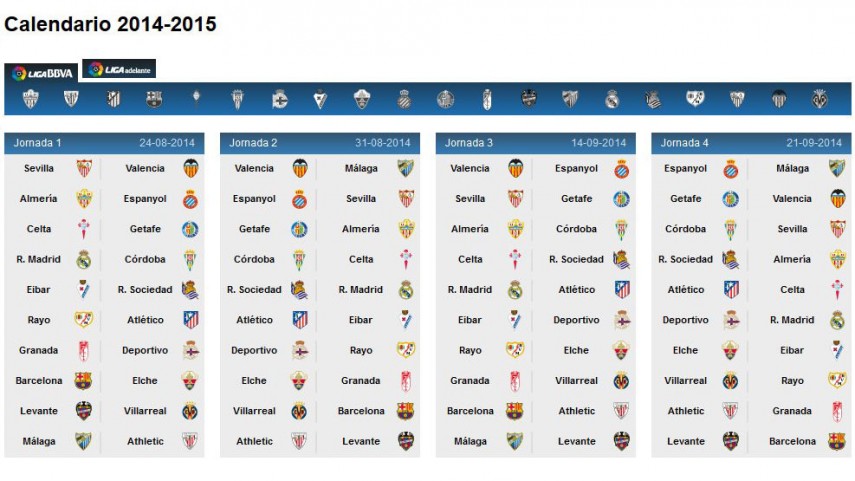 The pairings have been announced for the next edition of the competitions following Thursday’s draw.

The weekend of 23 and 24 August sees Liga BBVA get underway. On Thursday the fixture draw took place at the Real Federación Española de Fútbol’s General Assembly, held at the Ciudad del Fútbol de Las Rozas. 20 sides are all in search of one dream, and millions of fans cannot wait to see their sides again, enjoy new signings and reacquaint themselves with their idols from a passionate last campaign.

Reigning champions Club Atlético de Madrid start away to another side from the capital, Rayo Vallecano. Second placed Liga BBVA side Barcelona host Elche at the Camp Nou, whilst the Copa del Rey and Champions League holders Real Madrid play at home to Córdoba, who will be making their first appearance in the competition for 42 years.

Some of the standout dates in the Spanish footballing calendar are the ties between the top three sides from Liga BBVA last year. Real Madrid - Atlético Madrid will take place on matchday three, the weekend 13/14 September. Real Madrid - Barcelona takes place on matchday 9, 25/26 October, with the second of the season at the Camp Nou on 21/22 March. Also, the clash between Barcelona and Atlético, which last season closed Liga BBVA, will be the penultimate matchday this time round, but at the Rojiblanco’s stadium.