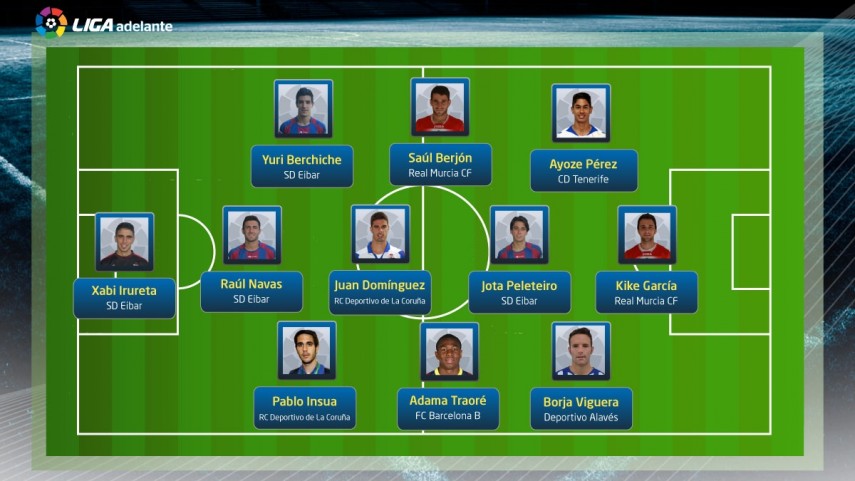 The Liga Adelante team of the season

The LFP.es team has selected the eleven best players in the championship.

After one of the most evenly matched and exciting seasons in the history of Spanish football, in which virtually everything was decided on the final matchday, the LFP.es team of reporters has selected the eleven most outstanding players of the 2013/14 Liga Adelante.

The goal is guarded by the SD Eibar keeper, Xabi Irureta, who with an average of 0,67 goals conceded per match was a key man in the extraordinary season of the Armeros, who have only let in 26 goals in the second half of the competition.

The defence is made up of three men. Pablo Insua, Raúl Navas and Yuri Berchiche in the centre. Aside from impeccable performances from the Eibar defenders, it is the young RC Deportivo de La Coruña full back who has stood out above everyone else.

The midfield is made up of four players who have shown their defensive and attacking qualities this season and displayed intelligent and elegant football. This is certainly the case of Dépor's Juan Domínguez. His reliability and confidence in every match have once again brought glory for the Galicians. He is joined in midfield by the experienced Saúl Berjón, of Real Murcia CF, and the hungry talent of Adama Traoré, of FC Barcelona B. As an attacking midfielder, Jota Peleteiro, has been a key man in Gaizka Garitano's team in their bid to play in the Liga BBVA next season.

Up front are three of the top scorers in the Liga Adelante. All of them scored plenty of goals during the season, but their marksmanship was particularly outstanding on the last few matchdays. Borja Viguera, the Deportivo Alavés striker, contributed with 25 goals to ensuring that his team was one of the most dangerous of the championship.

His partner in attack is Kike Garcia, the Real Murcia striker and scorer of 23 goals this season, eight of them in the Pimentoneros' last nine matches. The three-man attack is completed by Ayoze Pérez, one of the most promising young players in Spanish football. The striker has delighted CD Tenerife fans this season with 16 goals, and his speed, sharpness and, above all, his nose for goal have caught the attention of Newcastle United FC, for whom he will be playing in the Premier League next season.

Other players such as Stefan Scepović, Raúl Albentosa, Jorge Morcillo, Julio Álvarez and Biel Ribas must also be mentioned. They have made a very good impression over the course of the season and next year they will once again delight the crowds every matchday.