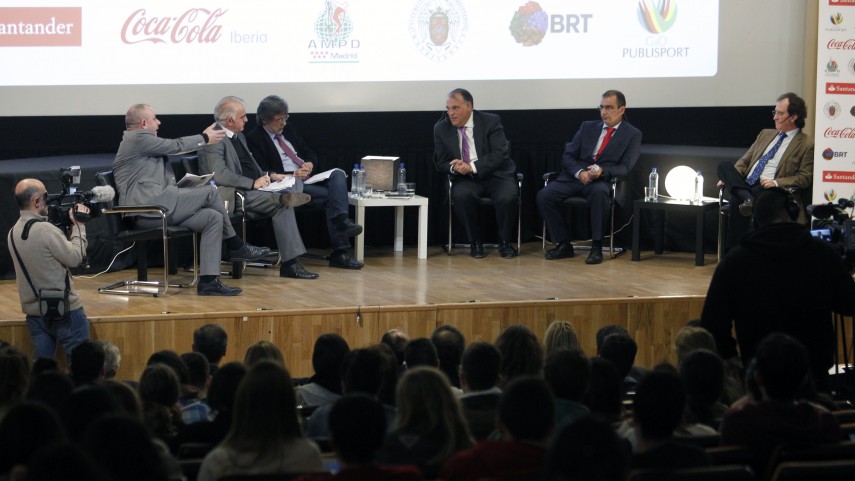 The LFP's leading role at the Sports Debate Forum

Javier Tebas took part in a conference with students of the Faculty of Information Science on fair play in Spanish football.

The Liga de Fútbol Profesional took part in the Second Sports Debate Forum which was held at the Faculty of Information Science in Madrid. Javier Tebas was the main guest at the conference, which was run by José Damián González, president of the Sports Press Association of Madrid and chief editor of La Gaceta, and Juan Ignacio Gallardo, assistant director of sports publication Marca; Pedro Pablo San Martín, assistant director of sports publication As; Julián Redondo, chief editor of La Razón and the president of the Spanish Sports Press Association; and Frédéric Hermel, the Spanish correspondent of L'Equipe also took part in the debate.

The central theme at the forum was 'Fair play, no matter what', while it also covered subjects such as match fixing and debt at football clubs. Javier Tebas explained that the world of match fixing "is a real problem that will spread like the plague if it is not eradicated". The president added that the LFP has the support of the Superior Sports Board but also said that "I miss the support of other institutions for sanctions, statutory reform, etc.", and stated that betting "has transcended the world of sport and introduced economic interests". Tebas clarified that "you are conning your fans, your teammates and your opponents and it must be completely eradicated".

Javier Tebas also explained his opinion on the distribution of image rights. "The president of the LFP is obliged to make sure that there is competitiveness in all departments, not only in terms of sport and not only economically" and added that "the goal is for all clubs to achieve that competitiveness with their own income". On this issue, Tebas said that "investment funds are an alternative system for financing clubs that should be properly explained, it is a situation that could allow for a better quality of football in Spain".

Regarding the global fame of the Liga de Fútbol Profesional, the president added that "in many places we are the most watched league in the world and we have to work to keep improving our image". Javier Tebas also spoke of his satisfaction at the increased attendance of football stadiums, "global attendance is up 4% on last season, a figure which almost equals the best season in the history of Spanish football".

Javier Tebas did not avoid the subject of refereeing errors and called for a "change in the way referees are selected for professional football in order to reduce the probability of mistakes".