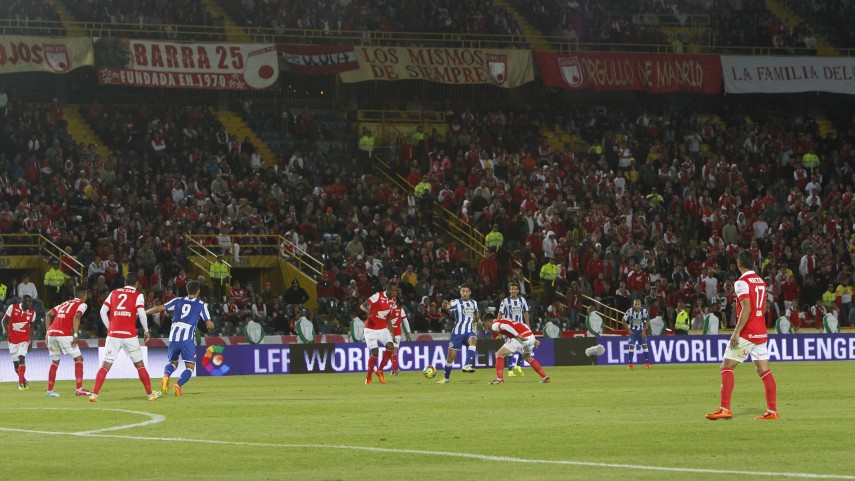 The LFP World Challenge tour kicks off in Bogota

Deportivo lost 1-0 to Independiente Santa Fe in the first match of the LFP-organised event.

The second LFP World Challenge Tour provided a thrilling first match. The Nemesio Camacho El Campín stadium in the city of Bogota provided the perfect backdrop for the first game of the tour, on which Liga de Fútbol Profesional teams are playing all around the world.

Club Independiente Santa Fe was the victor in the first match after beating RC Deportivo de La Coruña 1-0 thanks to a goal from Venezuelan midfielder Luis Manuel Seijas. There was a great atmosphere in the stands, where the Colombian side’s most loyal supporters relentlessly cheered their team on throughout the 90 minutes.

The match also provided a stage for the directors of Deportivo and the team from Bogota to build on their relationships. Members of the board of the team from Coruña Martin Pita and Fernando Vidal brought a Deportivo shirt with them for exhibition in the El Campín museum in Bogota, where there are signed kits from all the biggest teams in South America and Europe.

For his part, the president of the Liga de Fútbol Profesional, Javier Tebas, was also present at the first match of the LFP World Challenge Tour, where he was able to see first-hand the great reception of the event in the Colombian capital. The head of the LFP also presented a plaque of recognition to the president of Independiente Santa Fe, César Pastrana.

Deportivo de La Coruña’s next destination on the LFP World Challenge Tour will be the city of Cali, where they will take on Asociación Deportivo Cali on 24 July at 20:00 (local), 03:00 in Spain. Updates and details on the event can be followed on La Liga TV.