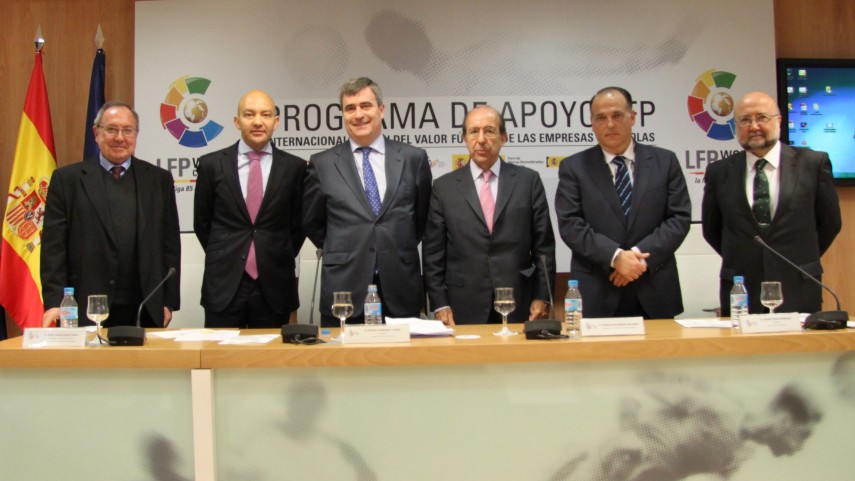 The LFP World Challenge is born

The programme, which has the backing of the Superior Sports Board, is tasked with the objective of spreading the LFP’s values, along with those of MARCA España (Spain the brand).

The headquarters of the Superior Sports Board hosted the LFP World Challenge presentation, a project that is tasked with spreading the values of MARCA España through an international football tournament containing the Liga de Fútbol Profesional’s best clubs. The event will be held between the 2014/15 and the 2016/17 seasons, and will serve to commemorate the 85th anniversary of professional football in Spain.

The initiative, which will have both public and private backing, will provide participating businesses with a meeting point between sport and international promotion. The Liga de Fútbol Profesional president Javier Tebas affirmed that the LFP World Challenge is "a project with an international competition that will use the power of football to bring people together". The LFP chief went on to explain that it would be a "global experience", uniting football clubs and Spanish businesses. "Football, and the LFP, are ensuring that the values of MARCA España carry on growing", Tebas said, adding that the objective is for "Spanish football and MARCA España go hand in hand".

Javier Tebas explained that the tournament will be accompanied with 'Spanish Experience', a business event that serves to help Spanish businesses grow, saying: "Spanish football is in debt to civil society". Support for this project has been evident ever since its creation from the Secretary of State for Sport. Miguel Cardenal explained that "Spanish football generates recognition and admiration all over the world", adding that "the LFP, like the rest of Spanish sport, is giving a lesson in how to help the economic recovery of our country".

"There will be a football match and Spanish Experience, a business event that will accompany the football, and will serve to help Spanish businesses grow. Seminars. Congresses. I think that Spanish football owes Spanish society", Cardenal added.

One of the institutions that is collaborating with the project is the Leading Brands Forum. Its president, José Luis Bonet, explained during the presentation that this is "a project in which we’re looking to help and collaborate, and we predict that it will have great success, helping to improve Spanish society". The director of the Office of the High Commissioner for MARCA España, José Ángel Jorrín, defined the LFP World Challenge as "a trip to excellence". Jorrín affirmed that "this project is a symbiosis between sport, industry and private investment, and we’re obliged to create benefits for all of society".

The Secretary of State for Trade, Jaime García Legaz, explained that in addition to the fact this programme will "will positively compliment the activity of ICEX, which will in turn mean the brand MARCA España is associated with excellence". The programme will also have the backing of the Secretary of State for External Affairs, whose president Gonzalo de Benito Secades confirmed will offer "the collaboration of embassies and consulates, who will work to promote the interests of Spanish businesses and the LFP".