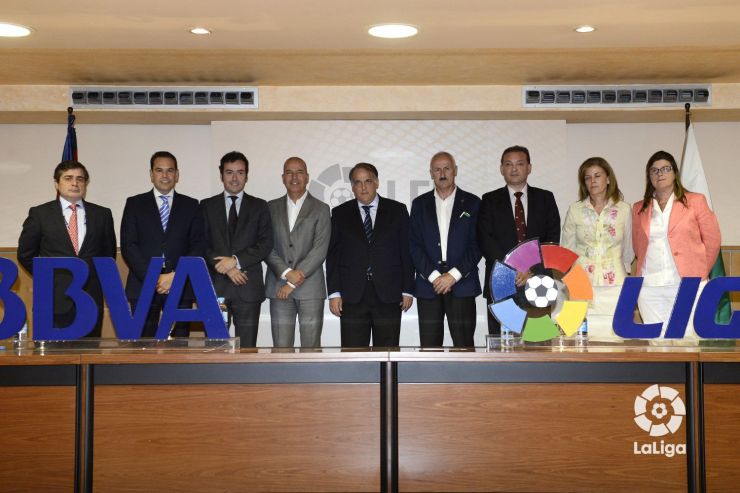 The LFP welcomes the promoted clubs

Javier Tebas, as president of the LFP, welcomed the seven new clubs who will play in the Liga BBVA and Liga Adelante in the 2014/15 season.

On Tuesday, the Liga de Fútbol Profesional hosted the clubs that have been promoted for the 2014/15 season. Javier Tebas, president of the LFP, was responsible for welcoming  the seven clubs, who were accompanied by various institutions from the world of sport, including the heads of the Supporters United (AFEPE), the Real Federación Española de Fútbol (RFEF) and the Asociación Futbolistas Españoles (AFE).

After welcoming and commending each individual club, the president of the LFP spoke of the sacrifice made by each club to win the coveted promotion and warned them that "not everything is acceptable to achieve sporting goals. The Spanish league grows if we maintain the values of good management".

In addition, the clubs wanted to highlight the excitement with which they are preparing for this new period in which humility, good management and Fair Play are essential ingredients. "We are starting a new era in the Liga Adelante. We dreamed of being able to compete with these teams some day and now that day has come", said the president of Llagostera, the team who will be playing in the Liga Adelante for the first time in its history.