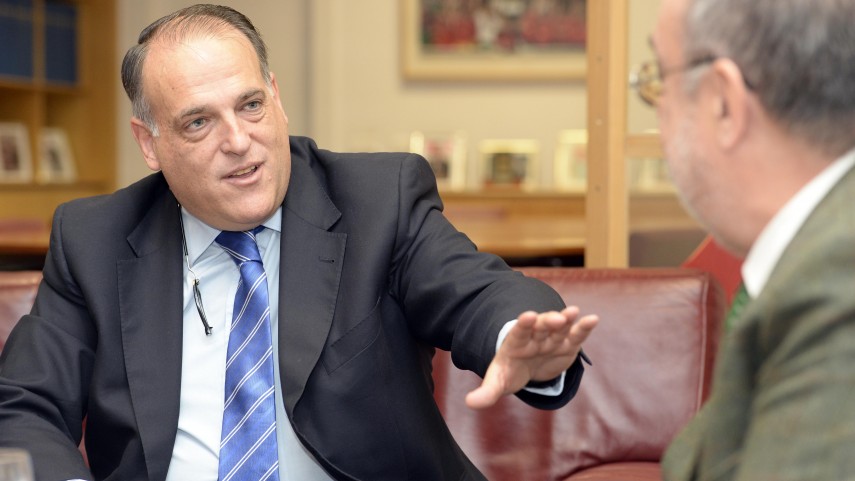 The LFP visits the Diario AS headquarters

Javier Tebas spent time with chief editor Alfredo Relaño and his staff to talk about the current state of Spanish football.

The Liga de Fútbol Profesional passed by the headquarters of Diario AS on Wednesday. Javier Tebas, president of the LFP, took part in a discussion with the chief editor of the Madrid-based sporting paper, Alfredo Relaño, and some of his subeditors. During the meeting, the president of the LFP talked about many subjects concerning Spanish football nowadays, including the distribution of television money.

Tebas addressed the financial controls adopted by clubs, and explained the course of action the LFP has taken since he has been in control: "Despite the constraints, expectations are high. It is a bittersweet feeling. [Clubs] have sold their players and greatly cut salaries. All of this is aimed at reducing the debt, and we will continue working to reduce it as much as possible".

The current situation of Liga BBVA and Liga Adelante clubs was another of the big talking points of the day. Tebas highlighted the good performances a lot of teams are enjoying at the moment and evaluated the similarities between the situation faced in Spain and that faced by other European championships. He also noted the relationship reductions in the price of season tickets are having on the attendances in stadiums.

Finally, the LFP president addressed two subjects that are of biggest concern to him at the moment: audio-visual piracy and match-fixing. He affirmed that work is being done to eradicate both problems, firstly with companies that cut illegal signals, and secondly by collaborating with bookmakers. He emphasised the importance of achieving a fair competition by both those who play football and those you enjoy watching it.