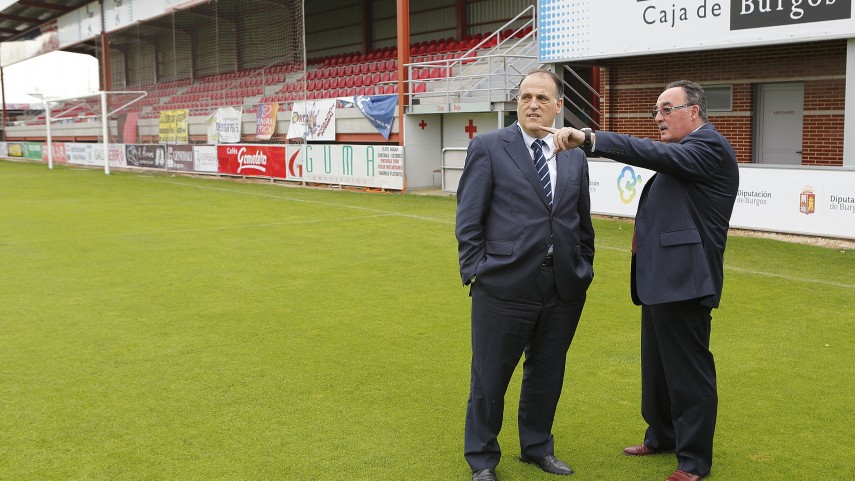 The side from Burgos received a visit from the Liga de Fútbol Profesional (LFP). The encounter is just one in a series of visits that the LFP will make to all clubs and PLCs.

After the visit both presidents appeared at a press conference. One of the main topics was the reform of the Estadio Municipal de Anduva. About this, Javies Tebas explained: "It's certain that the lost direct investment isn't accountable, but we can be sure that the LFP will act and help with all it can using its knowledge". With regards to the instalments, Tebas said that: "the delay in advancing is only valuable if we speak of a period of execution, that's to say, with an approved plan and the viability of it attained. In these circumstances the league will consider adapting the measurements of any possible decision took on the subject".

With regards to the search for sponsors to aid the starting of work, Javier Tebas said "we're talking about a municipal installation, not a property, therefore I understand that sponsored should come forward in this aspect. We're talking about making a positive development for both the future of the club and a structure of growth in order for them to continue to compete in the Liga Adelante".

Javier Tebas praised the club's process of growth and integration into professional football. "It's an organised club in a good economic state who follow the rules, and with an important vision in broad scheme of things", he explained. Also, the president added that "the sides that follow the rules and reduce their debt are without doubt in an advantageous situation compared to those who owe money and find themselves in a bad situation".

For his part, Mirandés president Alfredo de Miguel, talked about the construction of the new stadium. "We're immersed in an obligatory process, we've looked for a plan to execute, but until we know of the help and sponsorship that's available, it would be irresponsible on our part to start construction". About the shared responsibility in the future of the club, the president of the side from Burgos added: "I don't contemplate that Mirandés will be facing this mission alone. We'll look for a joint-financing in which the club, along with sponsors, move forward with our idea for the future of our institution and club".