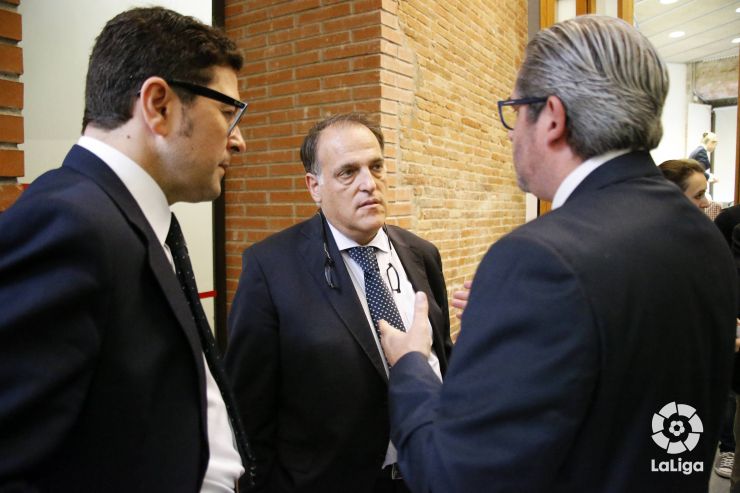 The LFP takes part in the International Conference against match fixing

Javier Tebas explained the lines of action the Liga de Fútbol Profesional is using to put an end to sporting fraud.

The Pompeu Fabra University met with the leading experts in the field of sporting integrity during the International Conference against match fixing on Thursday. Present at the event were Javier Tebas, the president of the Liga de Fútbol Profesional, and Manuel Quintanar, the director of the Department of Integrity.

Tebas also used the debate as an opportunity to explain the measures the LFP is taking to eradicate this problem. The solutions mentioned ranged from issuing sanctions, creating of an integrity department in the Liga de Fútbol Profesional that would be led by Manuel Quintanar, and educating the football clubs and Sporting Anonymous Societies.

Chris Eaton, the Sport Integrity director at the International Centre of Sport Security, outlined the international vision going forward in the fight against matching fixing. Eaton agreed with the representatives of the LFP that “the involvement of governments should be greater in order to find a stability point in sport”, and added “sport is falling victim to organised crime”.

Speaking on behalf of UEFA, the director of the Department of Disciplinary and Integrity-related issues, Emilio García Silvero said that the top footballing authority in Europe has taken a zero tolerance stance on this issue and that its strategy is based on “education, investigation and punishments”. Silvero explained that “collaborating with police and judicial forces, and working with Europol” are some of the ways of addressing the problem.