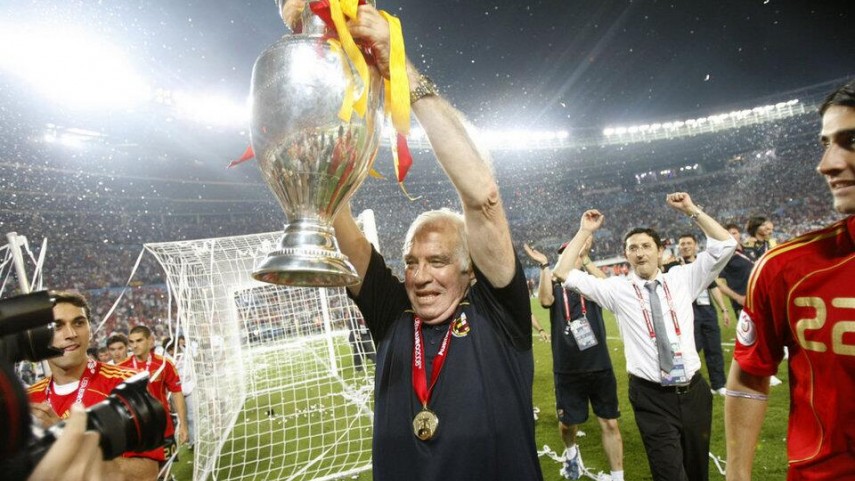 Javier Tebas: "We have lost one of the most important men in the history of Spanish football"

The president of the Liga de Fútbol Profesional, Javier Tebas, on behalf of all the Liga BBVA and Liga Adelante clubs, has left a message of condolence for the passing of Luis Aragonés: "We have lost one of the most important men in the history of Spanish football. From his childhood until his passing he was always on the football pitch. There is nobody like him."

Ángel María Villar, president of the RFEF, remembered Luis Aragonés as "an extraordinary coach who was loved and admired by everyone in football". Vicente del Bosque also stated that "he laid the foundations", adding that "today is a very sad day for our football because we have lost a man who was key to the modern history of the sport". The State Secretary of Sport, Miguel Cardenal, defined Luis as "a footballing icon who took our national side to the top. He will always live on in the memory of Spanish sport". The Minister of Education, Culture and Sport, José Ignacio Wert, sent a telegram to the family of Luis Aragonés expressing his "deepest condolences for the passing of a great man", "the person who brought Spanish football into a new era".

The president of Club Atlético de Madrid, Enrique Cerezo, stated that "above all he was an Atlético man. On behalf of the club, I would like to offer our condolences to his family. Luis Aragonés was a great player and coach, but more importantly he was a great person and a friend". All the Liga BBVA and Liga Adelante clubs have offered their condolences through heartfelt messages, most of which speak of Luis Aragonés' unforgettable personality.

But if there was one group in particular Aragonés affected in football, it was his players. Loving messages and photos have filled social networks since new broke of the death of the "Sabio de Hortaleza". Iker Casillas, Real Madrid CF and Spain captain expressed his sorrow: "RIP one of the most influential people in my professional career. Thank you for everything 'gaffer'!!". David Villa left a message of thanks for Aragonés: "It is a very sad day. We have lost one of the greats. Thank you for making me who I am. RIP Luis Aragonés".

Cesc Fàbregas, Sergio Ramos, Andrés Iniesta, Xabi Alonso, Álvaro Arbeloa, and many more Liga BBVA and Liga Adelante players coincided in calling Luis Aragonés one of the most influential coaches in their sporting careers. "I will never forget your advice and teachings", said Sergio Ramos. "His personality affected so many people's lives", said Xabi Alonso. "Yougreatly affected both my professional career and me as a person", stated Cesc. "Thank you for everything you taught us, for everything you gave us… We will remember you", said Iniesta.