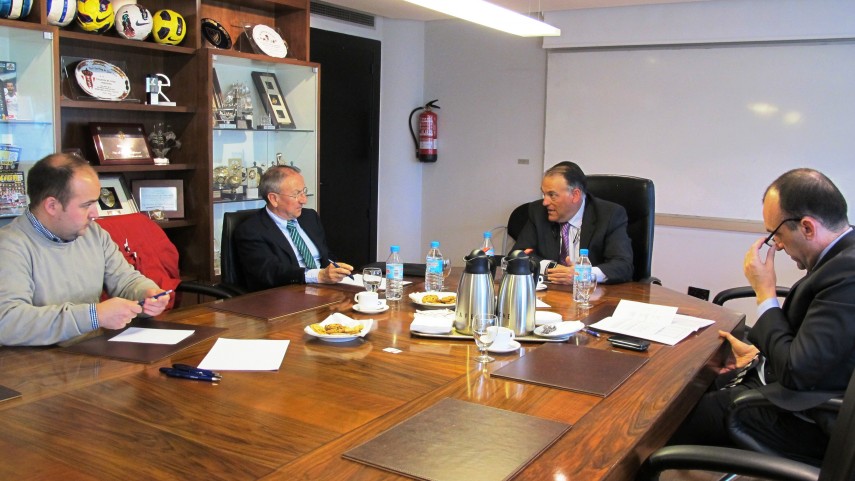 The LFP meets with PSOE and PNV

In his meeting with the parties, Javier Tebas stated that "the LFP will meet the financial monitoring goals for this season".

The president of the Liga de Fútbol held an informative meeting with representatives of the PSOE and EAJ-PNV at the LFP headquarters, in order to inform them of the financial monitoring of Liga BBVA and Liga Adelante clubs.

Javier Tebas informed Emilio Álvarez from the PSOE and Gorka Álvarez, representative of the EAJ-PNV, that "the LFP will meet the financial monitoring goals set for this season". According to the president of the LFP "the winter transfer market is controlled by means of various audits carried out by the clubs and SADs (Public Limited Sports Companies), and the financial trend is on target".

Both Tebas and the general director of the LFP, Javier Gómez, has indicated that the figures for the reduction of debt among Liga BBVA and Adelante teams will be reduce 100 million Euros less than 750 million at the start of this season. Both insisted that "it was the target set, without counting Real Madrid and F.C. Barcelona, and we are going to achieve it".

PSOE and EAJ-PNV were informed that, for the first time, the LFP has opened disciplinary cases for the financial monitoring of clubs and SADs. Javier Tebas has justified it as "another example of transparency enabling the clubs to know what is going on with the rest".

In the coming seasons, according to Javier Tebas, "the football sector will be quite healthy and only a few clubs will be in debt". In the 2011-2012 season the clubs lost 200 million euros; in the following year they received profits of between 12 and 15 million euros; and in the current season they are expected to generate a profit of around 80 million euros.