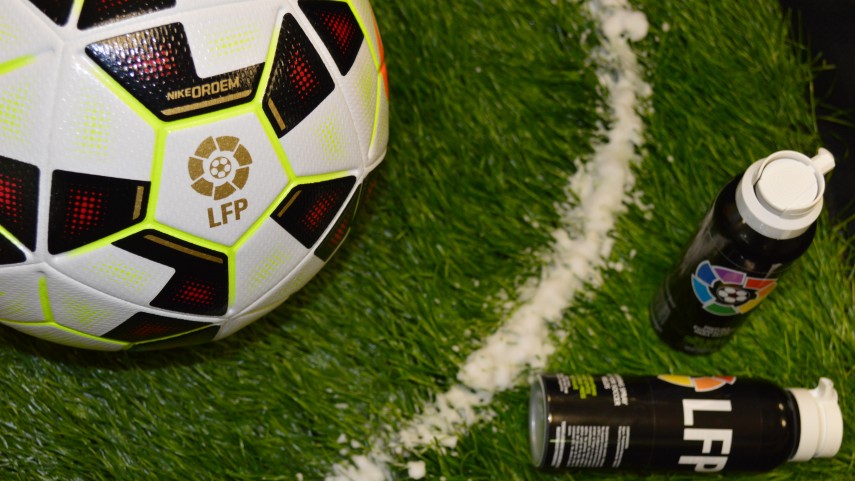 The LFP leads the way with vanishing spray in Spain

Use of the spray will be implemented this season in the Liga BBVA, the Liga Adelante, the Copa del Rey and the Supercup of Spain.

The Liga de Fútbol Profesional is at the forefront of world football once again, leading advances in technology in order to improve the sport. One of the latest innovations is vanishing spray, which will begin to be used this season in the Liga BBVA, Liga Adelante, Copa del Rey and the Supercup of Spain. The collaboration between the LFP, the Comité Técnico de Árbitros and the RFEF has led the Spanish league to be one of the European leagues to implement the use of this tool.

The LFP has sent 66 sprays to each club in the Liga BBVA, 72 to the Liga Adelante clubs and three holders to each club, which will be kept by the teams’ delegates and be used in all official competitions this season. Each referee with have three aerosols per match.

The aim of this device is to guarantee fairplay in football as it can be used to indicate the exact position from which a free-kick should be taken and the minimum distance from it that the defensive wall must be positioned.

The indicator spray consists of a small bottle that the referee carries throughout the match with a small holder on his waist, and it is used to mark the legal positions of both free-kicks and the defensive wall. The aerosol, which disappears from the pitch after 45 seconds, is harmless to people and to turf, and it does not harm the ozone layer.

The new tool was used for the first time in European competition at the UEFA 2014 Under-17 European Championships and was successfully used at the FIFA World Cup in Brazil and the UEFA Super Cup. The aerosol will also be one of the new features of the UEFA Champions League this season.