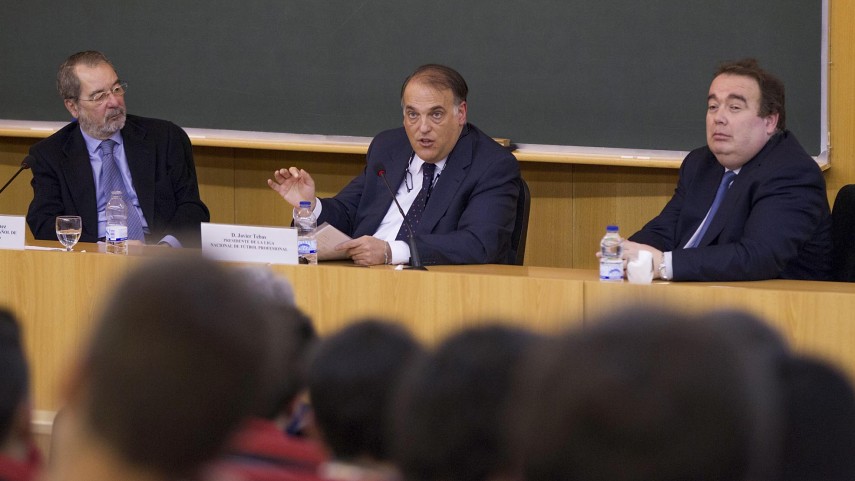 The LFP at the Sports Law Seminar at the UAM

Javier Tebas took part in the “Present and future of professional football in Spain” debate, organised by the Universidad Autónoma de Madrid.

On Wednesday the Liga de Fútbol Profesional took part in the sports law seminar ‘Anonymous sporting societies in professional Spanish football’. Javier Tebas, president of the LFP, was present at the Universidad Autónoma de Madrid (UAM) representing the institution at the round table.

In a talk about the ‘Present and future of professional football in Spain’, the LFP chief was accompanied by Liborio Hierro, professor in Philosophy of Law at the UAM and president of the Spanish Sporting Discipline Committee, editor of AS newspaper Alfredo Relaño and Daniel Abanda, head of Communications and Marketing at CD Leganés.

Tebas spoke of what the LFP are doing to improve and make Spanish football’s future more competitive. “In the 2016/17 season, the LFP will centrally sell the television rights and spread the money with a system similar to the one employed in Italy. It will produce a change, meaning that lower clubs can attempt to compete in Europe”, said Javier Tebas.

With regards to economic controls, the LFP’s president said “we are working hard to make the debts in Spanish football smaller”. He also said that “at the end of the season more than €300 million will have been taken off global debt”. On this subject Alfredo Relaño affirmed, “The LFP are doing a good job with the economic plan”.

Finally, Tebas emphasised the fight against piracy and corruption in the sale of matches. “We have a problem with piracy and the LFP has created its own mechanisms of control to combat the problem”, said the president.